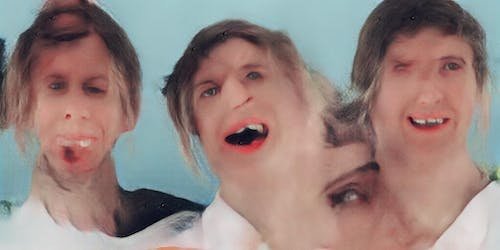 “We wanted to find a way to interrogate technology more deeply,” explains Claire L. Evans, one-third of the Los Angeles-based pop group YACHT. “From the ground up,” adds her partner and YACHT founder Jona Bechtolt.

The group—rounded out by longtime collaborator Rob Kieswetter—would know: their seventeen-year career has been marked by a series of conceptual stunts, experiments, and attempts to use technology “sideways,” from rock-and-roll PowerPoint presentations to their Webby-award-nominated campaign for I Thought the Future Would Be Cooler (2015), which featured, among other things, a music video that played only during Los Angeles’ rush hour and an album cover that could only be seen via fax. Even the band’s name speaks to this: YACHT is an acronym for Young Americans Challenging High Technology.

CHAIN TRIPPING is the band’s seventh album and third with DFA Records. Recorded between the band’s home in Los Angeles and Marfa, TX, the ten-song collection marks a shift in the group’s relationship with technology and their art. Rather than trying to comment on existing platforms from within their own filter bubble, the band stripped their process down and rebuilt it using a technology entirely new to them—Artificial Intelligence, and more specifically, machine learning. The result is an album that merges invention and intimacy, “challenging” technology from code to content.

In order to compose CHAIN TRIPPING, YACHT needed to invent their own AI songwriting process. It was a journey of nearly three years. They first tried to discover any existing YACHT formulas by collaborating with engineers and creative technologists to explore their own back catalogue of 82 songs using machine learning tools. “We listened to raw audio samples of a neural network trying to sing in Claire’s voice,” says Bechtolt. “We reduced our entire compositional output to MIDI data. We flattened our lyrics into text files, into words among millions that would be fed to a weird custom algorithm. We talked to pioneers of algorithmic composition, and to startup founders who promised us they could reproduce our sound in two hours or less.”

Eventually they created their own working method, an uncharacteristically low-tech approach to a high-tech possibility, painstakingly stitching meaningful fragments of plausible nonsense together from extensive, seemingly endless fields of machine-generated music and lyrics, themselves emerging from models created with the help of generous experts in neural networks, deep learning, and AI. Armed with these custom and custom-tweaked machine learning models, YACHT was able to generate massive volumes of lyrical and melodic information—much of which was “hiding in-between” melodies in their our own back catalogue—which they then approached as source material, using a process more influenced by analog cut-up writing techniques than anything explicitly technological.

“We’re a band that has always loved to operate within constraints, so for this we created a strict set of rules. We were allowed to subtract and rearrange, but never to add a note. Everything on the album is generated, but the structure, arrangement, and performance is entirely ours,” explains Kieswetter.

YACHT have always been multifaceted, willing to collaborate with thinkers far beyond the pop realms. In the past, they’ve created perfumes, apparel, apps (the beloved Los Angeles calendar app 5 Every Day among them) and sculptures, and Evans has a considerable career as a writer; her first book, Broad Band: The Untold Story of the Women who Made the Internet, was published by Penguin in 2018. This project was no different. The list of collaborators for Chain Tripping is a who’s who of the art and machine learning community, from the senior research scientists at Google Brain’s Magenta group to the award-winning creative technologist and poet Ross Goodwin; artwork, typography, liner notes, lyric videos and even YACHT’s band photo were all created using different visual machine learning models in collaboration with artists like Mario Klingemann, Tom White, Allison Parrish, Barney McCann, Tero Parviainen and Sam Diggins.

The results surprised even the band. Although the process might sound opaque, even impersonal, it was deeply human. The band culled phrases, melodic moments, and unexpected patterns manually from a morass of generated material, painstakingly assembling songs rich with lucid imagery and stuttering rhythms; they performed and recorded everything live, wrestling the complicated machine melodies into their bodies and often breaking themselves out of highly embodied habits. Chain Tripping is full of phantom earworms and pop strangeness, and yet it is unmistakably their own. “We think the final result is more human than human, more YACHT than YACHT, “ says Bechtolt. “And easily the thing we’ve made that most reflects how we see ourselves.”

The band’s characteristically frenetic pop sound is toned down on songs like “(Downtown) Dancing,” a scotch-tape disco track that marries an anxious, funky bass groove with the lo-fi sound of the NSynth, a neural synthesizer that uses a machine learning process called latent space interpolation to imagine new sounds in between traditional instrumentation. The NSynth appears all over Chain Tripping, notably on the jewel-like “Blue on Blue,” a euphoric love song wound with surprisingly omnidirectional melodies. The generative composition process “broke us out of a mold of concise, formal, four-bar patterns and let us accept longer, meandering riffs,” explains Kieswetter; like most of Chain Tripping’s standout tracks, the song contains lyrical fragments that coalesce, collapse, and reform into new patterns with fluid ease. The process also surfaced a wealth of surreal idioms, like “Loud Light’s” anthemic “I’m so in love / I can feel it in my car,” or the lovely phrase “palm of your eye,” which pins the lilting chorus of the driving “SCATTERHEAD” into place, a song that splits the difference between postmodern rock and no-wave dance music with wiggly ease. “It’s vaseline on the dance floor,” suggests Bechtolt.

“We saw this album as an opportunity to teach the machine our values, our history, our community, and our influences,“ adds Evans. “This record is a product of a technological moment that is rapidly evolving. It’s wonky and sometimes dances at the edge of meaning. It taught us everything we wanted to know about ourselves: how we work, what moves us, and which ambiguities are worth leaning into. We didn’t set out to produce algorithmically-generated music that could ‘pass’ as human. And we didn’t want to use AI to write push-button pop songs, either. We set out to make something meaningful. Something entirely our own.”

What started as drum lessons over ten years ago between longtime partners Shana Lindbeck & Papi Fimbres, they never thought their musical careers would culminate to this point of being a two-piece dance/club cumbia infused/kraut band. Being in Orquestra Pacifico Tropical together since its inception, these two have definitely honed in their sound & musical prowess with their new band, Dreckig.