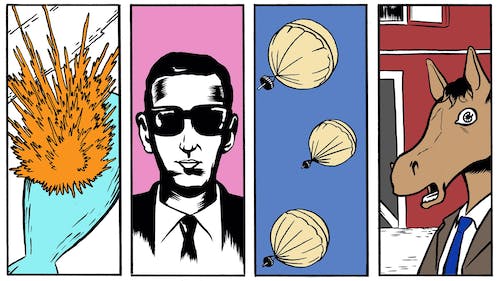 Wonderly's True And Tall Tales of the Pacific North Weird

Wonderly opens the door to their film-composing world to birth a batch of new songs, plus phase one of a cycle of short films they’ve been working on. Best-known for the theme to the New York Times' The Daily Theme, Dear Sugar Theme and film music, the duo also pens irresistible narrative songs filled with strange production twists, harmonies, and stories worthy of film.

With their new song and film cycle True & Tall Tales of the Pacific NorthWeird, Jim Brunberg and Ben Landsverk focus on their passion for odd stories from the region and collaborate with multiple disciplines, including authors, live-action filmmakers, animators, native storytellers and artists.

See the Oregon city of Bayocean fall into the sea! Feel the D.B. Cooper story from the viewpoint of a flight attendant! Understand the Balloon Bombs of WWII! Meet mythical creatures of time immemorial, as described by Celilo Elders! Yup, it’s all over the map—the map of the Pacific NorthWeird.

Wonderly is pan-idiomatic music for film, records, podcasts, and radio shows, made by Portlanders Jim Brunberg and Ben Landsverk.

Wonderly has been featured by The New York Times and on the critically-acclaimed music podcast Song Exploder. In 2019, they were voted “Best Theme-Song Smiths” in Willamette Week’s yearly “Best Of Portland” issue.

Wonderly composes, arranges, performs and records music for any production. Their music elevates and intensifies the emotional center of any moment.