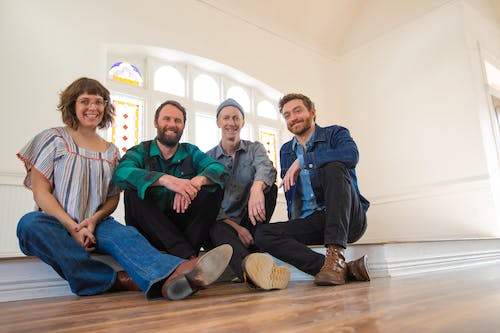 Colorado’s Trout Steak Revival has announced the release of their fifth studio album in Winter 2020 and will kick off its album release with a tour through the Colorado mountains, Montana, and the Pacific Northwest. The album includes an array of original songs crafted over the last several years by the individual songwriters and beautifully arranged and recorded by the band over the course of the summer of 2019.

Passionate. Handcrafted. Self-Reliant. These three words comprised the foundation of Trout Steak Revival’s mission to create and release “The Light We Bring.” Ever celebrated by fans for wearing their hearts on their sleeves through song, the band members dig deeper into their own humanity, delivering moving lyrics and echoing themes of love, death, home, and change. Throughout the album, the emotive songwriting finds balance and harmony in the band’s energetic and melodic instrumental arrangements.

“The Light We Bring” is the fifth studio album by the Colorado string band and their most organic offering to date. The choice to self-produce the album was an intentional effort by the band members to summon a camaraderie in the studio setting that echoes the band’s practices together on the road. As both the artists and producer, they relied on themselves to deliver an album that was genuine in both its creation and presentation. The band’s inclusion of guest instrumentalists, including brass, woodwinds, and orchestral strings, enrich the album’s vibrancy. The variety of original songs crosses over countless genres and reflects diverse influences. The band’s self-reliance expanded even to the cover artwork, which features a chalk drawing of a high desert landscape by guitarist William Koster.

As the band’s sound has evolved over the years, so too has its albums, and “The Light We Bring” only furthers that truth. What started as a group of friends exploring mountain bluegrass is now a free-form and exciting exploration of indie, folk, and roots music, beckoning listeners to join the band on its musical journey.

Ever since winning the Telluride Bluegrass Festival Band Competition, Trout Steak Revival has quickly become a quintessential Colorado band. The band won an Emmy Award for a soundtrack they contributed to a Rocky Mountain PBS. They collaborate with school children in mentoring programs in Colorado and nationwide as part of the Can’d Aid Tunes Ambassador Program. Their music is featured on Bank of Colorado’s radio and television advertisements. Westword named them Denver’s Best Bluegrass Band, and they were nominated as a Momentum Band of the Year by the International Bluegrass Music Association.

Left Coast Country is a modern string band formed in 2010 from the exploding newgrass scene in Portland, OR

Their debut, Dark Down and Blue features the group’s high-energy, hard-driving originals and their contemporary take on the old bluegrass sound. Their second, self-produced and self-titled album propelled their versatile, dynamic sound onto the never-ending tour circuit of North America.

Dedication to their craft has made Left Coast Country one of the hardest working, up-and-coming acts in the Northwest. The statement “for LCC pickin’ is not a hobby, not a job, but a way of life,” (B. Salmon – Bend Bulletin) could not be any more accurate.

Left Coast Country constantly strives to expand their music and blaze new territory across the country. At home in Portland, find them at renowned venues such as the Aladdin Theater, The Doug Fir Lounge, and Mississippi Studios.

In July 2014, Left Coast Country took home first place in the 13th Annual Northwest String Summit Band Competition, being the first ever Portland bluegrass band to do so.

Since 2010, they have had the esteemed pleasure of playing alongside and sharing the stage with musical pioneers such as Vince Herman (Leftover Salmon), Steep Canyon Rangers, Fruition, Frank Solivan and Dirty Kitchen, Head For The Hills, Danny Barnes, Hackensaw Boys, Pert’ Near Sandstone, Brothers Comatose, and Shook Twins, to name a few.

Look for Left Coast Country coming to a city, town, or festival near you.