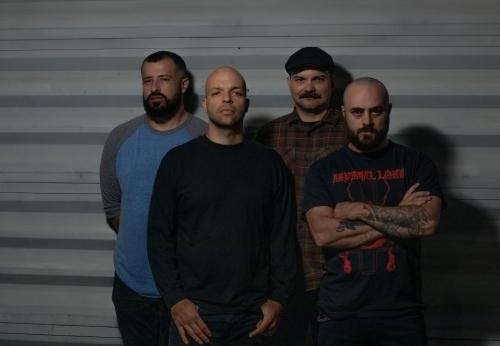 “People are always trying to figure out which compartment we fit into. They wanna put us on a shelf. But in a world of Sabbaths, we get to be Van Halen.”

That’s Torche guitarist and producer Jon Nuñez talking about his band’s uneasy relationship with categorization. Over the last 15 years, Torche—led by the core trio of Nuñez, guitarist/vocalist Steve Brooks and drummer Rick Smith—have often been saddled with one-dimensional niche terms like doom, sludge or stoner rock, but none of them really apply. “That shit is tiresome,” he says. “When people ask me what kind of music we play, I just say, ‘Loud rock n’ roll.’”

Which is a good way to describe Torche’s fifth and latest album, Admission. From the rumbling cannonade of opener “From Here” and chunky bomb-string detonator “What Was” to the staccato siren song “Reminder” and glistening thunder pop of the title track, it’s a record that manages to be hi-powered, dynamic and melodic—all at the same time. “To me, it’s a real record with peaks and valleys and emotional ups and downs,” Nuñez offers. “Musically, the intensity doesn’t stay in one lane.”

Nuñez says Admission’s musical range—and Torche’s unwillingness to be pinned down—is a result of the band’s wide spectrum of unlikely influences. “I feel like we all listen to so many different types of music, but not really much within the realm of what we’re considered to play,” he explains. “We like 70s rock, shoegaze, ambient music, obscure noise, and stuff we grew up with like Latin or Hispanic music. All of us grew up in Miami during an interesting time, so there’s all kinds of things that drew us in.”

Behind the scenes, Torche underwent some lineup changes in the wake of 2015’s Restarter. First off, Nuñez switched from bass to guitar. To fill the bass position they enlisted Eric Hernandez of Miami noise-rockers Wrong, who joined the original Torche triumvirate in time to play on Admission. “We knew right away that Eric was the guy,” Nuñez explains. “He’s bailed us out on drums before when Rick had some health issues. Now that this is the lineup, things are easier. No one needs to be told anything, and everyone’s excited.”

The fact that Nuñez switched to guitar during a short break between tours didn’t slow Torche down in the least. “We bounced back pretty fast,” he confirms. “I jumped on guitar in nine days and we did a whole US tour. I was so nervous at that first show that I got a headache onstage. But then you ease into it and it feels right.”

With the band’s members spread between Florida and Los Angeles, Torche got together whenever possible to work on the songs that would become Admission. “I think the only two we wrote on the spot were ‘Extremes Of Consciousness’ and the closer, ‘Changes Come,’” Nuñez explains. “We wrote some in Gainesville, some in LA, put one together in Colorado and a couple other ones came together in Miami. It was exciting to do things differently and it kinda kept us on our toes.”

Writing in different locations also allowed the band to get together more often than they had been able to for Restarter. “The way Restarter was put together was kinda nuts,” Nuñez explains. “It was written in two weeks and then recorded in two weeks. It was a little stressful. I wanna say we got together four times for this record, which was twice as much as last time.”

There was also an abundance of material to work with this time around. “Steve was writing stuff, Eric was writing stuff and I was writing stuff,” Nuñez says. “We just honed in on what would make a cohesive record. It ended up being three songs from each of us, and the others are collaborations. It was a real group effort.”

Admission also marks just the second time Torche have actually printed their lyrics in an album sleeve. “Usually Steve’s lyrics make sense to me in some sort of abstract way, but this album has some more personal stuff in there,” Nuñez point out. “It’s a cool little insight into Steve’s twisted head.”

In fact, Admission might be Torche’s most personal album yet. “This album is more revealing of who we are,” Nuñez offers. “I think the core of the band is happier and more inspired than we have been in some time, and we’ve got somebody new who’s excited to be a part of it. It’s just refreshing. On tour, we wanna play the entire thing because we stand by this shit. It feels right. It feels real.”

The early history of experimental duo PINKISH BLACK is as mournful and tumultuous as the band’s music. The Fort Worth, Texas band originally formed in 2005 as a three-piece doom/jazz project known as The Great Tyrant, but The Great Tyrant never got the chance to release any music. In February 2010, midway through a battle with technical problems, the band’s bassist Tommy Atkins tragically committed suicide, bringing the album’s recording and production processes to a halt.

After Atkins’s passing, remaining members Jon Teague and Daron Beck set out to redefine current conceptions of heavy music with an unorthodox and forward-thinking synth-driven approach, furthering the work they had started with The Great Tyrant. The band, now a duo, changed their name to PINKISH BLACK in 2010, and released their self-titled debut that same year on Handmade Birds. Pinkish Black was critically acclaimed, as was the band’s 2013 follow-up on Century Media, Razed to the Ground. In its review of the former, Pitchfork called PINKISH BLACK “a band that exudes promise,” while Stereogum called the latter album “an absolute stunner.”

Since Razed to The Ground, PINKISH BLACK have solidified both their confidence and their direction. They signed to Relapse in December 2014, and have steadily refined their songwriting and style over the course of the last two years. Though usually associated most closely with the metal scene, PINKISH BLACK have demonstrated an unflinching capacity to dip their toes in all sorts of disparate musical markets, from doom metal and industrial to post-punk and no-wave.

October 2015 saw the release of PINKISH BLACK’s newest opus, Bottom of the Morning, a 7-track dark music journey that runs the full gamut of influences. PINKISH BLACK have touched on in the past as well as many new experimentations added to their palette. From the gothic, horror-movie-esque organ intro of opener “Brown Rainbow” to the wistful, fuzzed-out conclusion of final track “The Master Is Away,” Bottom of the Morning is simultaneously dark and catchy, dissonant and melodic, smothering audiences with heavy layers of distorted, repressive gloom that still end up as earworms despite their pessimism. It’s as if Scott Walker and John Carpenter were having a bad acid trip with the Melvins, or else as if someone dipped PINKISH BLACK’s ambling, psyched-out space-rock influences in a vat of molten iron. Recorded at Echo Lab Studios in Argyle, Texas by Matthew Barnhart and mastered by James Plotkin (Cave In, Electric Wizard), Bottom of the Morning solidifies PINKISH BLACK‘s reputation one of the most interesting and far-thinking experimental duos currently around.

SRSQ (pronounced seer-skew) is the solo project of Kennedy Ashlyn (vocalist/keyboardist of Them Are Us Too). Creative voids aren’t filled, but rather holes left that push the edges of the present into new realms of consciousness. SRSQ’s pulse began after the death of Kennedy’s closest friend and TAUT collaborator Cash Askew, a casualty in the sudden and tragic Oakland Ghost Ship Fire of 2016. Driven by loss, SRSQ became the vehicle for Kennedy’s transformative process, exploring nuance, nostalgia, reflection, and reconciliation, manifesting in the aural landscape of Unreality.

As a debut, Unreality is entrance into a new form of storytelling, traversing the present while pulling from a deep swath of experience, immersion, and sound. Like the impulse it pulls from, each song evokes the complex duality of meditation—where simple intersects with infinite. Ambient synthesizers that approach harshness, relentless arpeggiations act together with Kennedy’s vocals as a lush weapon, weaving cloudlike fables over orchestration that’s familiar and foreign. Trance-like at times, yet always rooted in cadence and structure, the synesthesia of sound and feeling takes cues from the delicate miasma of Cocteau Twins, My Bloody Valentine, or Dead Can Dance, using their example as the ground floor for building a new temple of frequency. Kennedy proves an adept architect of rhythm, using sequenced electronics as a deep backbeat that allows the harrowing beauty of her vocals to lead the journey.

Produced by Matia Simovich of Inhalt, Unreality is simultaneously crisp and full, each tone and note occupying its own unique sonic world - grief butted against power, tracked to a heavy heartbeat.