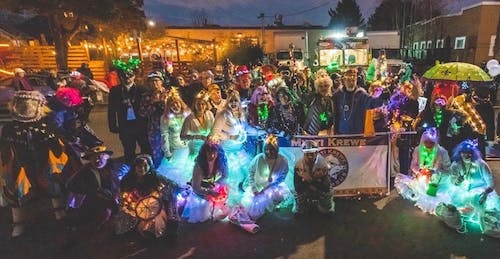 Mysti Krewe of Nimbus formed in 2010 to celebrate Louisiana Mardi Gras, and bring that spirit of joy to Portland. The Krewe is composed of both former Louisiana residents and many locals who love the food, music, and culture of Louisiana.

Besides their annual Ball, the Krewe hosts the Portland Mardi Gras Parade, a free community event on North Mississippi Avenue. During the Parade, hundreds of Portlanders revel in the streets with lighted costumes, marching music acts, a kid’s costume contest, and plenty of beads! The Mysti Krewe also decorates a limited number of mini umbrellas, which have become highly collectible “throws.”

Each year, the Krewe participates in many other events, including the Portland Rose Festival Starlight Parade, the Waterfront Blues Festival, Portland Pride Parade, and The Big Float. The Mysti Krewe adds color and enthusiasm to any event it attends.

The Mysti Krewe has a charitable wing, “The Goode Werks Krewe.” Last year the Krewe raised money for two non-profit organizations with similar missions in Music Education: Ethos Music Center in Portland and The Roots of Music in New Orleans!

The ever-popular Too Loose Cajun/Zydeco Band rocks the house in the Portland area with their infectious brand of Cajun and zydeco dance music from Southwestern Louisiana. This band has two fiddles, accordion, electric and acoustic guitars, piano, the traditional Louisiana rub-board, and a kickin' rhythm section. With their vocal harmonies tart and sweet, male and female, they are perennial favorites on the zydeco stage at the Waterfront Blues Festival, as well as at area parties, weddings and festivals. So come on down, and bring your dancin' shoes.