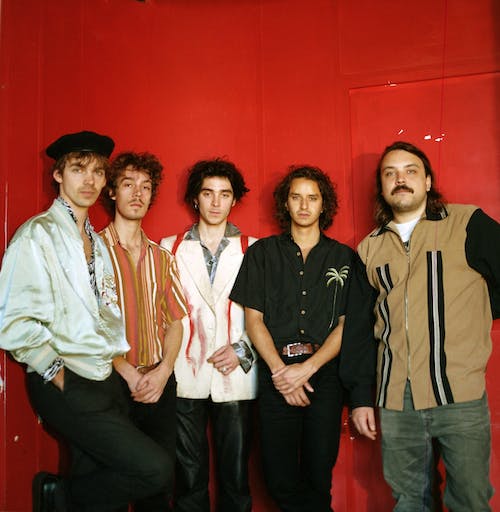 The Mauskovic Dance Band are fusing no-wave dance punk, Afro-Caribbean rhythms and space disco in a “controlled explosion” (The Quietus).

Since the release of their “Down In The Basement” EP on Soundway Records in early 2018, the band have found themselves on a hectic touring schedule – not to mention being involved in other side projects. Following stints with Turkish psychedelic folk rock group Altin Gün, and touring with the re-formed 70s Zamrock outfit W.I.T.C.H., Nic Mauskovic also teamed up with Dutch neo-psychedelic artist Jacco Gardner to form the “cinematic Balearic disco” duo of Bruxas (released by Dutch institution Dekmantel).

Deep in the vein filled jungles of each of our hearts beats music with roots as wide as continents and influence as deep as time itself. Cumbia, music of the Southern American Hemisphere. Orquestra Pacifico Tropical has taken this frenetic, addictive rhythm and accomplished what musicians across time and space have always done, bringing crowds into a blistering dance frenzy. From clubs to the forests of the Pacific Northwest, to hear the ecstatic thump, rumble, and sheer brilliance of the racing rhythms of coastal Colombia side by side with the psychedelic guitar explorations of the Peruvian rain forest is to travel across continents and through time with Orquestra Pacifico Tropical as the guide. WIth respect to those who came and innovated before us, and armed with an arsenal of percussion, woodwinds, horns, accordion, and guitars, these 11 friends have come together in the spirit of capturing and breathing new life into this most essential of musics. Cumbia, music of the people.