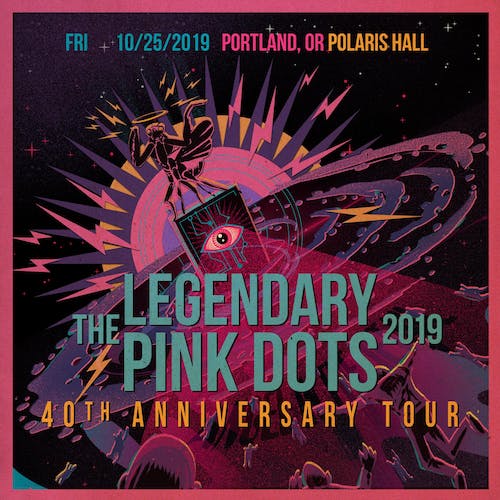 SOLD OUT: The Legendary Pink Dots At Polaris Hall

Anglo-Dutch rock band formed in London, UK, in August 1980. In 1984 the band moved to Amsterdam, Netherlands.

The Legendary Pink Dots exist in the fields of experimental and psychedelic music. The band is fronted by Edward Ka-Spel, who doubles as singer and chief lyric writer. Phil Knight (The Silverman), Erik Drost, and Raymond Steeg make up the current lineup of the band. The sound is often a conglomerate of electronics, saxophones, guitars, drums, and Ka-Spel's distinctive voice and lyrical invention. Side projects of the band include The Tear Garden (with Cevin Key from Skinny Puppy), and Mimir (with Christoph and Andreas Heemann), plus solo ventures.

Randall Frazier has been performing solo and in various band incarnations as Orbit Service since the 1990s, releasing no less than 5 brilliant moody albums since 2001. With beginnings in dark psych rock tempered by contemporary influences from Slint to Palace Brothers, the Orbit Service sound has increasingly moved outward into experimental realms. His most recent two albums on Beta-lactam Ring Records 2011's A Calm Note from the West and last year's Stereo Magic (Portal In 13 Parts) are steeped in musique concrete, electronic drone, and inner ear echoes. Randall's haunting voice, however, is always floating atop the sonic wave machines, and somehow uses profound alienation to make the music more accessible. His collaboration with the Legendary Pink Dots called A Star Too Far released Saucers Over Lincoln another astounding album on BLR in 2015 that remarkably sounds more like Orbit Service than LPD.