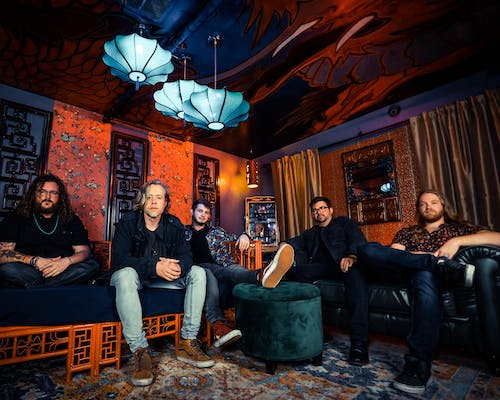 Sometimes inspiration strikes from the immersion of living in a far away place. The view of the ocean. The sound of a rainforest at sunrise. The smell of an open-air market. The embrace of the wild human experience. However, maybe the nostalgia for a certain place might be attributed instead to a feeling, or a time, or even a person. Sometimes, inspiration stems from a place that everyone can relate to, but maybe no one’s actually been. This is the music of The Hip Abduction, the vibrant St. Petersburg, FL-based collective that formed over a mutual appreciation for West African and early Jamaican reggae/dub music.

DoveDriver is a collaboration between guitarist/producer Teddy Presberg and DJ Klavical that includes multi-instrumentalist LeClare Stevenson and drummer Corey Foster. These sought after sidemen use the group to showcase original, experimental songs that mesh funk, jazz, and electro rock. The band grooves hard like a J Dilla beat, but melts minds with John Coltrane sheets of sounds via synths and shredding guitars on top.

Presberg is a veteran musician and an award-winning composer who writes for advertising, TV and film, but also produces for other artists he admires. He has released records stateside on Ropeadope Records (DJ Logic, Christian McBride, Snarky Puppy, Charlie Hunter and Medeski, Martin, and Wood) and also internationally with Timewarp Records.

He has toured the US and shared the stage with other current guitar masters such as David ‘Fuze’ Fiuczynski, Fareed Haque, and John Scofield. Presberg constantly changes his band lineup with musicians to interpret him.

Klavical, formally known as Davis Cleveland of Abangatang, and mid 90's Hip-Hop group Sick Mediks, has toured the world as Mic Crenshaw's DJ. Joining forces with Presberg allows the two producers to bridge the gap between DJ and Live band.