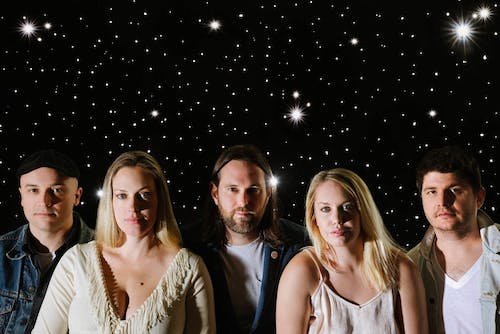 Do503 + Vortex Music Magazine Present a #PDXmusic Showcase with

Following their 2017 release, Mind is a Mountain (produced by Son Little), The Get Ahead sought to further synthesize the project with a unified spirit with their April 2019 release, Deepest Light (produced by Raymond Richards). The Get Ahead has cemented their ties in literal ways during the making of Deepest Light, as the band’s lead singers Nathan and Juliet were married on the Oregon Coast and recently welcomed a new baby to their world. From its striking cover art featuring a female deity in an idyllic Northwestern forest setting to its bold musical statements on the celebration of life, healing, and the importance of keeping open hearts, Deepest Light is a moving milestone from a band that continues to grow and to develop a powerful group identity. Deepest Light represents an amalgam of American Roots music and features the bands invigorating three-part harmonies and moving lyricism.

Expanding on their love of American R&B, The Resolectrics are a rock & soul power trio exploring the vast landscapes of roots music with layered harmonies, multi-tonal guitar tracks, and ambitious arrangements. Since releasing their “Booker T. meets The Band” debut record, High Water, guitarist Tate Peterson, drummer John Becher, and bassist Bob Dunham have honed a leaner, meaner approach through continuous gigging and constant refinement. The band’s new record, Open Seas, adds some timeless, British Invasion-style psychedelia to the mix along with a touch of horns and harmonica that help reconnect the music to its soul-based heritage. It’s a bigger sound that’s radio-ready and set for bigger stages and a larger audience.