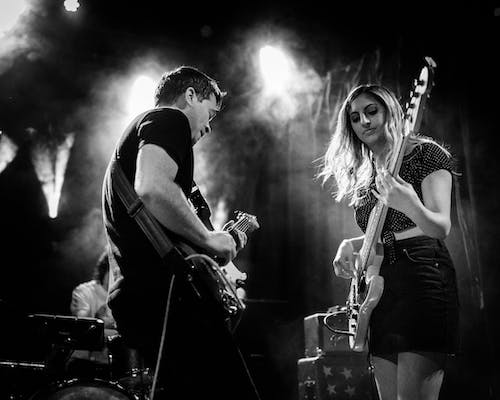 Tango Alpha Tango is a rock n’ roll band founded by husband and wife duo, Nathan Trueb and Mirabai Carter. They started off as high-school sweethearts and soon became bandmates and got married along the way. They hail from Oregon City, a suburb of Portland, Oregon, and now call the latter home. TAT has earned a storied reputation as one of the northwest’s most entertaining and exciting rock n’ roll bands in the decade that they have been making records, touring, and bending genres like rock, blues, pop & psychedelia into a sound all their own. Trueb’s frenetic stage presence and virtuosic guitar playing are perfectly balanced with Carter’s clever, slinking bass-lines. Their voices also compliment each other well: the distinct growl of Nathan’s vocals are tamed nicely by Mirabai’s soft, sultry backgrounds. Their show is not one to be missed, some of their fans recount seeing them over one hundred times live! Their filmed performance on the legendary KEXP radio show in Seattle has been viewed nearly 400,000 times with very good reason.

After eight years as a musician, Jon Black felt constrained working under his own name. His music had outgrown his singer-songwriter career, so he released an album of new material under the name FORT ATLANTIC.

The debut surpassed every expectation: over 10M streams, and more than 5M views on YouTube. Black plotted his next steps.

A cross-country move took him from Birmingham to Portland. He put a band together and went on tour. Soon they had new material, bigger and bolder still.

Recorded in a secret location on the Oregon coast, SHADOW SHAKER, VOL. 1 tells of perseverance in the face of unrelenting trials. Crashing waves of cymbals and guitars frame lush forests of analog synths, mirroring the landscape of Black’s adopted home. Primal motifs in the lyrics (darkness, water, sunlight) evoke the anxieties of life in 21st-century America, themes that presaged the storms to come.

In 2015, the band was abruptly dropped from their label, the newly-completed record still unreleased.

As old plans were scrapped and new plans hatched, Black’s pregnant wife went into emergency labor. They spent two long months in the NICU. Those songs of perseverance and hope, recorded for the rejected album just six months prior, were newly visceral.

The album was released on the band’s own Hot Garbage label in October 2017. The video for Bathed In Sunlight is an Official Selection in the 2018 Philadelphia Independent Film Festival and was submitted for a 2017 Grammy Nomination.

Dead Men Talking is a modern soul band from Portland, OR. Formed in the summer of 2014 by songwriter Corey Distler of The Martyrs and Zinnie for Short, Drummer Max Lilien of The Fourth Wall and Southern Belle, and multi-instrumentalist Casey Becker of Project Eldridge, the group released their self-titled, debut EP in the summer of 2015. Drawing from the classic bands of the 60's and 70's as well as Distler's jazz piano and composition studies at Portland State University, their sound is described as "an addicting sound wave of a ride" by Girl Underground. The band has begun work on their second release and has added keyboardist/organist Paul Hasenberg of Sallie Ford’s band and Shores of Oblivion to the roster.