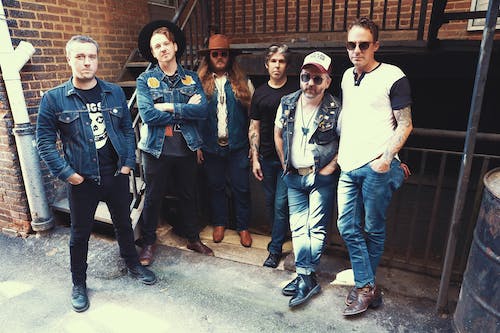 Vandoliers are the next wave of Texas music. The six-piece Dallas-Fort Worth group channels all that makes this vast state unique: tradition, modernity, audacity, grit, and—of course—size.

Formed in 2015, the self-proclaimed “Converse cowboys” emerged from a group of Dallas-Fort Worth musicians who’d already logged more than a decade in their own punk and folk bands. Vandoliers mix raw, rough-edged roots music with the focused, fiery storytelling of frontman Joshua Fleming, who says of joining Bloodshoot:

“When we received the invitation to perform at Bloodshot’s annual SXSW party we were completely beside ourselves. Being from the same hometown as our heroes the Old 97’s, we’ve grown up fans of the label and have wanted to be a Bloodshot band since day one. I even sent a terrible demo submission when we were first getting started three years ago. I can’t put into words what it feels like to have the faith of the same institution that has put out so many of my favorite albums, but I am happy to call Bloodshot home and can’t wait to get to work on our next album.”

Behind him, the band (bassist Mark Moncrieff, drummer Guyton Sanders, fiddler Travis Curry, electric guitarist Dustin Fleming (no relation), and multi-instrumentalist Cory Graves) kick up plenty of fast-moving dust, filling the songs with train beats, gang vocals, blasts of brass, and bursts of guitar. Vandoliers’ sound is truly a tour of the many subgenres that originated in the Lone Star State, from outlaw country to Texas swing, electric blues, and even Tejano. At the same time, it’s a twist on those familiar sounds, delivered with a wink of the eye and a bang of the head. (As the Dallas Observer amusingly asserted, it’s “as if Calexico and Dropkick Murphys got together for a fiesta.”) It’s twang and tattoos, grit and guitars, honky-tonk and horns, Tejano and Telecasters. It’s Vandoliers.

Vandoliers’ first two albums Ameri-Kinda (2016) and The Native (2017) were released on State Fair Records. The band has toured with such country and rock-n-roll stalwarts as Marty Stuart, Lee Ann Womack, Old 97’s, and Reverend Horton Heat.