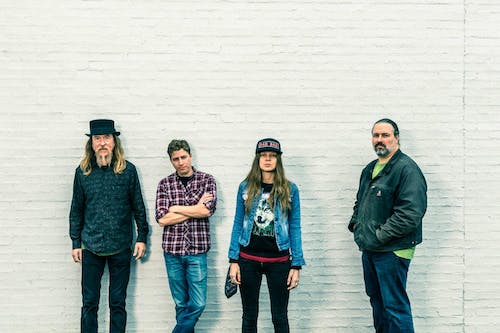 Sarah Shook And The Disarmers

When Sidelong, Sarah Shook & the Disarmers’ debut album, was released in early 2017, it quickly earned kudos for its blast of fresh, fierce honesty and sly wit. It was a welcome new voice in a genre too often mired in the staid and conventional. And while that record may have come to many as a surprise, Years solidifies the point: Sarah Shook & the Disarmers have moved from getting people’s attention to commanding it. The album–with its sharpened songwriting, unique perspective, deepened sound and roll-up-your-sleeves attitude–will grab you by the collar and put a defiant finger to your chest. It is resolute, blunt, and unflinching.

Inspired by artists such as the Sex Pistols, Elliott Smith and Hank Williams, Sarah sings with confidence, control, and, at times, a hint of menace. The Disarmers match her on every track, coloring the tales of resilience and empathy with as much urgency as ever as well as a broader sonic sweep. It’s easy to hear Sarah as a close cousin to artists like Hurray for the Riff Raff and Margo Price on the title track, or in the country-‘60s mod vibe on “Lesson.” “Good as Gold,” sporting a kiss-off line for the ages, “You’re as good as gold/ I’m as good as gone,” is both vulnerable and defiant, soaring with pop-inflected harmonies. And with an expansiveness evoking the wide-open West, “What it Takes” speaks to the truth of the record, to her life, and to the universe.

At its pounding heart, Years crackles with a pointedly contemporary and relevant take on the outlaw spirit. Built around the buoyant pedal steel of Phil Sullivan, and the post-punk rattle and Live at San Quentin hum of Eric Peterson’s guitar, there are echoes of Nikki Lane and Merle Haggard as much as Ty Segall. Its home is the ragged-but-real honky tonk, not the bro-country “honky tonk.” The barroom singalong “New Ways to Fail” is classic, smile-through-the-pain country. “Damned If I Do” could be the “Drivin’ Nails in My Coffin” of the 21st century, if we let it; a perfect song for rolling in the wry and sneaking in a quick two-step. The sinister “The Bottle Never Lets Me Down” will get anyone who’s ever been wronged righteously flipping the bird as they knock back the next shot. Therapy in the face of personal devastation takes many forms, after all.

As Sarah herself tells it...

This record is about finding a way. A way through exhaustion, depression, betrayal, hangover after hangover, upper after downer after upper, fight after never-ending fight. It’s about picking yourself up and dusting yourself off after years of being trampled and beaten down, jutting your chin out, head high, after they’ve done their worst, and saying, “Still here.”

With what PopMatters describes as "tenacious swagger," critically-acclaimed solo artist Ashleigh Flynn recently dialed up the volume and debuted an all-female rock band as a nod to the “Rosie the Riveter” archetype from WWII.

Flynn grew up in Kentucky and cut her teeth on local bluegrass music and Motown. A prolific songwriter and performer blessed with unbridled charisma, she arrived on the Americana scene in 2008 with the release of her third LP, American Dream, a poetic lament to the elusiveness of that national ethos. A Million Stars followed in 2013 – a rollicking journey celebrating the women pioneers of the American West.

Ashleigh Flynn & The Riveters’ inaugural LP hit the streets in 2018 featuring a sound that hearkens back to early Stones, ‘70s psychedelic country rock, and alternately charms like a Sunday afternoon front porch session. Produced by her longtime musical collaborator, Chris Funk of the Decemberists, the 10 original tracks feature Flynn’s soulful vocals and compelling brand of songwriting, amped-up and virtuously enveloped by the electric guitar work of Nancy Luca and Jenny Conlee on all manner of keys. Luca honed her style and skill playing with Tom Petty and Bo Diddley. Conlee hails from the Decemberists as well. The rhythm section boasts two additional highly-regarded Portland musicians: Jolie Clausen on drums and Carmen Paradise on bass.