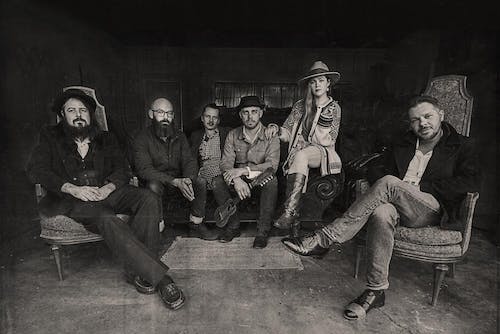 Ezra Bell’s first full-length debut features ebullient soul twang, flowing and leaping like the music of a late 60s/early 70s recording of well-trained freaks dabbling in various genres. This Portland band sounds like they effortlessly recorded one of those forgotten-gem “cult albums”, despite it being early 2018.

After three well-received EPs and playing regularly in Portland since 2013, the playfully literate and cheerfully plaintive Benjamin Wuamett and his gaggle of quite fit players, conjure up a festive dusky folk-rock-blues-jazz-R&B-pop vibe that doesn’t smother out the melancholy. These haunted stories include key tracks “Tourists” (“This one is about realizing the game is rigged, but you still have to play; it’s the only game in town”); “Yawning at the Seance (“This one is about the stories we tell ourselves in order to feel like everything is okay”), and “Let Me Do the Talking.” About that last one: “The opening line is a rip-off of something the boxer Jack Johnson said when asked how he managed to so intrigue women. He said ‘eat jellied eels and think distant thoughts.’ I think it’s one of the great travesties (and a telling indictment of our society) of our time that a great man’s name has been usurped by some surfer singing about breakfast.” The glistening, giddy music on these tracks help to document the car-wreck gas-lit lifestyles Wuamett masterfully describes. He displays gleaming shards of a self-depreciative self-awareness but also someone busy getting lost. “The overall theme going into this?” Wuamett answers to what the album is about. “Desperation. A call to arms. A whimper. A declaration that being witty by yourself at 4 AM in a basement, is a poor way to live.” Ezra Bell features Maurice Spencer (bass), Tom Trotter (drums), Aaron Mattison (horns and arrangements), Honora Hildreth (backing vocals and percussion), and Jeremy Asay (keys and guitar) more-than-ably backing up Wuamett’s story-songs and satirical jigs with organic precision.

Wuamett came up with the band name when he was in Portugal and a girl he was with dared him to try a nearby concession stand’s popcorn snails. He had two full bowls. “They were delicious,” he says. “When I got back to Portland, I couldn’t sleep. On the way to work the next day, after a rainfall, I saw a slug crossing the sidewalk. I bent down and ate it raw on the spot. I didn’t go to work that day I went home, grabbed a garbage bag and spent the morning gathering snails, slugs, worms (not sure if worms fall in the mollusk family but, still, delicious) which I brought home with me. Hours later, as I sat shirtless on my couch, covered in sweat, I knew I had a problem. It would be too long a story to talk about all the places my disease took me. Suffice to say — I once hitchhiked to California because I really wanted to taste a banana slug. In the end, it became too much and I sought help via the internet. I began posting on various forums about my problem. I hadn’t been to work in weeks. Unfortunately, there are very few mollusk addicts on the web and my various inquiries went without commiseration until a nice man from Georgia spoke up and we began a long correspondence during which he shared with me the tools that had enabled him to survive in this strange world. He saved my life. His name was Ezra Bell.”

"Oregon’s own Cedar Teeth has a sound as lush and layered as the Mount Hood National Forest, which happens to be a stone’s throw from the band’s hometown." - WILLAMETTE WEEK (JUSTIN CARROLL-ALLAN)

Cedar Teeth didn’t plan to start a band around the campfires that lit up their Oregon youths in the forests of the Cascade foothills that form a clear-cut divide between Portland and the surrounding wilderness. The genre bending roots troupe owe their inception to bassist Rayson Gordon, who forged a musical link between friends and provided their secret headquarters: a cedar shed on his grandparents’ 40 acre forestland on Green Mountain Road. In their new practice space, campfire tunes turned into intricate songwriting and friendships became a partnership.

Following their 2014 debut album, Hoot, Cedar Teeth built their reputation on stage, whether at festivals like Summer Meltdown and Wildwood, or at clubs throughout the Pacific NW, where they have joined bands like Fruition, Shook Twins, Motopony, Hot Buttered Rum, and Magic Giant.

On their 2017 EP, Farewell To Green Mountain, Cedar Teeth explore everything from indie rock and grunge to psych folk and bluegrass, reflecting the diversity inspired by their lives on the dividing line of societal opposites. Produced by Larry Crane (Elliot Smith, The Decemberists), the EP leans heavily on backwood harmony, allowing complex song structures and off-kilter melodies to support tales of love and war and the moments in between. In one sense, Farewell to Green Mountain is a goodbye to both their formative practice space and the vanishing wilderness and community they knew growing up; a sense of loss that makes its way into songs such as “Cancer” and “Mama’s Mourning”. But then again, a voice of defiance emerges in songs like “Winter” and “Echoes Grounding”, testaments to renewal and resilience in the face of the dying light.

While their range of sonic interests and influences defy easy classification, it is difficult not to hear Levon Helm, Rick Danko and company, The Band, hollering from the grave. Indeed, imagery reflecting organic flesh and bone, mingling with gnarled old-growth roots music, is what this band is all about. Call ‘em whatever you like: they are harmonizers and collaborators and Cedar Teeth won’t let the fire go out.

Jake William Capistran is a Portland-based musician who's unique blend of folk, rock, and soul can be heard up and down the west coast with the simple accompaniment of an acoustic guitar, or the support of his [up to] seven-piece backing band, The Hot Young Gunslingers.

His first release, Goners, racked up over 100,000 plays in 2016, while his newest record - 2017's concept-driven Rodeo EP - was featured in VORTEX magazine along with a live, in-studio video for his breakout single, Goners.