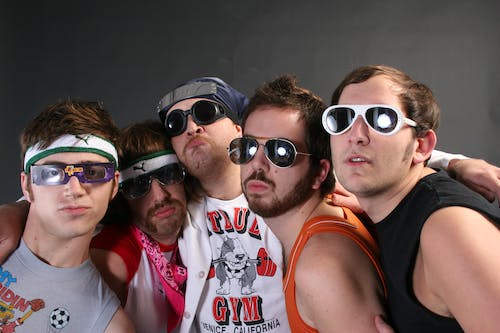 Portland boy band from 2005 with a global agenda of sexiness. Reunion show 2.21.2020 at Mississippi Studios, Portland.

Self-described "ridiculous, oversexed Portland boy band" Sexy Pants accidentally started after Portlander Adam Barnett and his roommates posted a joke MySpace band page featuring silly dance songs and photos of themselves in cutoff jeans, pouring milk on each other. It became slightly less of a joke when the Tonic Lounge took them seriously and offered them a show.

"It was sort of the transition of, 'Oh shit! Really? So we need to write more songs, and then figure out how we're going to perform them?'" says Barnett, 25, who goes by T.C. (Too Cool) when he's in his oversized Sexy Pants sunglasses. Out of costume, he and the rest of Sexy Pants look like they could be members of any Portland indie-rock band. But onstage, they're a twisted cavalcade of high socks, belly hair and ironic T-shirts.

Who is Internet Beef?

Internet Beef is made up of a diverse group of people that collaborates in a very special, and beautiful way. The actual band has 4 members: Bobo Lebeef, Jamburger Helper, Chopped Libber, and Dr. Beeflin. Bobo is 1st-gen, Bay area, Hungarian-American, bilingual, power-diva and can play every instrument she touches. Jamburger is an Afro-Caribbean, Miami-native percussion powerhouse that is always the life of the party. Chopped Libber and Dr. Beeflin are the interracial, dueling-shredder, power-couple that started it all. Although each of our backgrounds are considerably different, we work, rehearse, and live like a family. Find us at your local Hooters, carbo-loading before our next sleepover.

Ok, but what is Internet Beef?

Internet Beef is, in its ideal state, a free-for-all art platform. A collaborative brand designed to give legitimacy to the silliest ideas in the Portland art community. It started as a social media tag group for internet arguments, sort of an Avante-Garde meme, and was even rumored for a time to be a cop trying to infiltrate the Portland music scene. (e.g. “Dr. Beeflin often tags Internet Beef beneath actual arguments on Facebook. I don’t even think I understood it was a band when I got followed by it on Instagram. It’s a jackass promotional move at the same time that it’s mocking such tactics. At times it seems almost as much a joke that won’t die as an actual band that plays shows.” –Matt Dinaro – RocknRollPDX)

Over the last two years, Internet Beef has collaborated with musicians, nonprofits, fashion designers, cinematographers, video game designers, painters, tattoo artists, dancers, protesters, restaurants, museums, and anyone willing, in order to be an all-inclusive art force collaborating towards a weirder world and creating a safe space for guilty pleasures.

Musically, Internet Beef has been described as “Nickelodeon of a Down,” and “Queens of the Stone Age but better.” RocknRoll PDX described it as: “The kind of thing you might encounter on Bandcamp, and think, what the fuck is this? Have these people had contact with other bands? All of it is so smart and unique and off-kilter re: good musical taste that it almost scans as bad.”

Internet Beef is a prime example of the power of diversity. While listening, you’ll find spooky Hungarian scales, backed by pumping Afro-Caribbean rhythms and emotionally-charged Mexican melodies, all powered by raw thrash-punk riffs and glittered with psychedelic prog rock. In one word: Extra. Internet Beef shows are theatrical, sexy, loud, emotional, communal, experiential parties that give everyone a chance to participate, dance, lose control, and be a part of something sillier than themselves.

Rap Class is musician/beatmaker/DJ John Kammerle. John K has long been an active supporter and participant in the Portland community known to deliver low-slung and blissed out house/disco sets that fearlessly ignore genre, while skillfully keeping you locked to the groove.