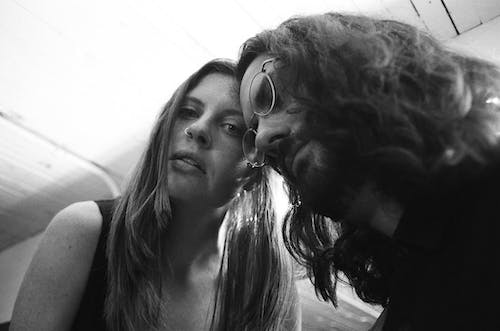 The music of Sama Dams steals from you most virtuously -- it will rob your sense of time and leave you wondering how long you’ve been awash in sound, rhythm, and ether.

On their fourth release, “Say It” -- released on Friendship Fever on April 6 -- Lisa Adams emerges from the background to deliver commanding lead vocals in her clarion soprano alongside partner Sam and the highly textured drumming of Chris Hermsen.

Almost in answer to the muted ambivalence that marks movements from the band’s previous “Comfort in Doubt,” “Say It” features the trio striking boldly throughout, both musically and thematically. According to Sam, “It’s about being more honest about what we’re thinking and feeling.”

Inspiration came from a year of watching silence make a mess of love in friendships close to the band. “Something seems off - you sniff something,” says Sam. “You don’t acknowledge it exists, and so by letting a small problem go, you allow it to grow.” “What’s the use for pockets if they’re empty?/Fill them up with things you use against me,” sings Lisa on the album’s first track, succinctly summing up the war of attrition underlying a failing relationship.

The band’s hallmark of grooving angularity packs even more punch when partnered with direct pathos, as in tracks like “Driving By.” Melding the wailing riffiness of fellow Midwest native Billy Corgan at his best with the cool synthesizer of a hundred beloved 80s soundtracks gone by, Sama Dams takes their distinctly left-field sound into anthem territory, and does it with audacious and tender authenticity.

The album feels like a coming-of-age for the band, who have been creating and touring out of Portland, Oregon since 2012. Having first pitched their tent in a time and place that revolved around the folky fusion of bands like The Decemberists, Sama Dams now claims a favored seat in a music scene edgier and more eclectic than the Pacific Northwest itself.

The Adams's, proactive about fueling the creative partnership at the heart of the band, are constantly looking both outward and inward for inspiration. They have toured relentlessly both domestically and abroad since the release of their first full-length album, honing their ambidextrous live performance to a soulful effortlessness that belies the complexity of the music. Their dynamism is infectious, spawning side projects and writing experiments that span states and genres.

My name is Denzel Mendoza, and I am Illegal Son.

I am a Filipino National brought forth from Singapore, raised in Las Vegas, NV, studied in New York City, NY and currently based in Portland, OR. I have lived in this country for 19 years, a majority of my life. I have lived an American lifestyle since I’ve been in this country but on paper, I am far from American. I am Undocumented and I am proud of it.

Illegal Son is an interpretation of the Undocumented way of life through Sound and Music. Day to day there is no promise of a tomorrow, there is only hope and fear—the revelry of another day is what I hope for. Processing life with the umbrella of being Undocumented consists of improvisation, constant back and forth of wondering what’s next; the music, the sounds, and ear of Illegal Son is improvisation. It’s insecure, it’s unstable, but hopeful.

Trombone, Upright Bass, and Drums are the foundation of Illegal Son.

Sheers is the solo project of harpist and singer Lily Breshears, who tours regularly as the keyboardist of bands Alexandra Savior and Haley Heynderickx. Drawing inspiration from the likes of Claude Debussy, Olivier Messiaen, and Rihanna, the music of Sheers is most easily described as neo-classical pop. However, as Willamette Week writes, “it’s a real treat to hear a band that’s almost a genre unto themselves.”