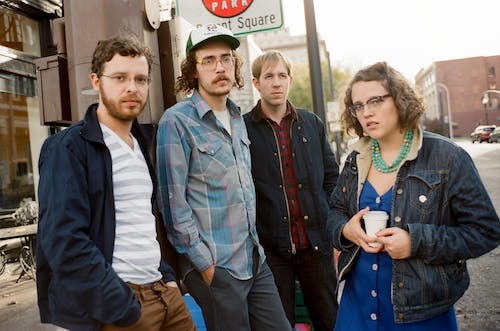 Sallie Ford And The Sound Outside

Sallie Ford And The Sound Outside

Lead vocalist and rhythm guitarist Sallie Ford was raised in Asheville, North Carolina and came from a creative family; her father Hobey Ford is a celebrated puppet artist and her mother is a music teacher. While Sallie learned to play guitar and violin as a child, and enjoyed singing as a teenager, she found herself intimidated by the artistic path followed by her parents and siblings (both of whom were involved in the performing arts), and has described herself as "the weird one" in the family. That changed when Ford moved to Portland in 2006 after dropping out of college; influenced by Cat Power, the Squirrel Nut Zippers, and Tom Waits, Ford developed greater confidence in her vocal abilities and began appearing at open-mike nights at local clubs. In 2008, she crossed paths with bassist Tyler Tornfelt and drummer Ford Tennis, two friends from Alaska who had been making music together for years and had recently relocated to Portland. Ford discovered she was simpatico with Tornfelt and Tennis, and they began performing together as a trio; when guitarist Jeffrey Munger heard them while playing for change on the street, he liked what he heard and soon volunteered his services, and Sallie Ford & the Sound Outside's lineup was complete.

Veteran songwriter, producer and multi-instrumentalist Mike Coykendall has been amazingly prolific over the last three decades or so. Currently most well known for his duties as a sideman, producer, and recordist via his work with M Ward, Blitzen Trapper, She & Him, Annalisa Tornfelt, & Tin Hat Trio, to name a few, Coykendall has been making his own unique outsider records since the mid '80s.

Coykendall (pronounced "Kirk-in-doll) was raised near the dead center of the contiguous 48 states of America in rural Norwich, Kansas. In early high school he began playing drums and guitar and went on to perform in mid-western regional cover bands during the early 80's. In the mid 80's he started writing and recording his own songs on cassette 4-track and soon formed Wichita, Kansas based prarie-psych popsters Klyde Konnor. Klyde was a prolific and daring band that self-released approximately nine cassette albums between '86 and '91.

In '99 after relocating to Portland, Oregon, Coykendall was able to expand his home studio and begin working other artists. One of those artists was M Ward. Their first collaboration was Ward's 2003 masterpiece Transfiguration of Vincent. Soon after, Coykendall became a member of Ward's touring band (also with She & Him), which continues to this day. In 2007 Coykendall finally gave up his day job to focus solely on music. Attrition pays off.

In 2012 Coykendall released his third solo record titled Chasing Away the Dots via Portland’s Fluff & Gravy Records. Dots is a widely varied, moody yet playful record with a lived-in feel and is the perfect vehicle for Coykendall's unfurnished vocals. This tidy little diamond in the rough also contained guest appearances by some of Coykendall's musical friends including M Ward, Zooey Deschanel, Eric Earley, & Ben Gibbard.

Translating Dots to a live setting was an undertaking, as the record itself was filled with guest performances and layers of studio psychedelia. Coykendall met that challenge by essentially turning the record inside-out and stripping it down to it’s basic elements. He took to rocking these songs out with an oversized Kay electric guitar while stomping a tin can kick drum and swishing away on a huge set of high-hat cymbals. He began calling it the "rig", and it stuck. These spontaneous performances are often a thick mix of Coykendall's own compositions and reinterpretations of other writer's famous or not-s0-famous gems. Not working from a set list and seemingly testing each situation to see what boundaries can be pushed.

In late 2015 Coykendall released a new record titled Half Past, Present Pending, partnering again with Fluff & Gravy Records. On this record, Coykendall takes the listener closer to the live "rig" performances by mixing excellent new compositions (check out "Hard Landing") with compositions from his back catalogue (check out "East of Cheney" or "Spacebaker Blues") in with fresh interpretations of other writers songs (he covers Roger Miller, Syd Barrett, etc) to great effect.