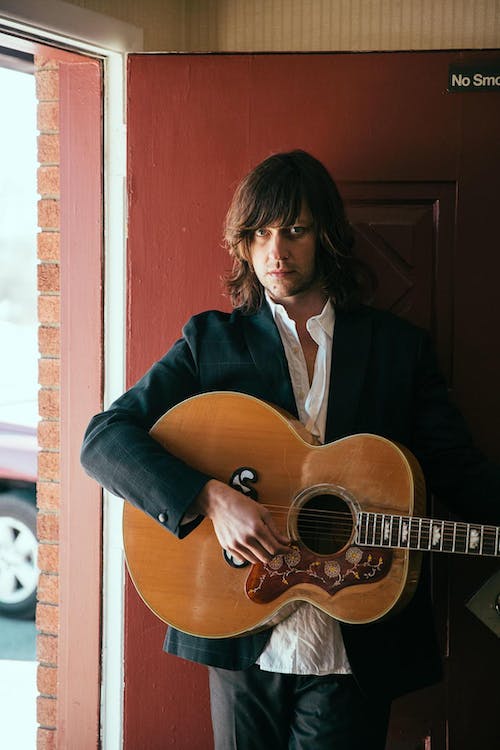 THE TRAVELER IN TEN PARTS

2. It is called The Traveler, and it was written and performed by Rhett Miller, along with members of Black Prairie, a band based in Portland that plays everything from bluegrass to klezmer to country and shares some members with the Decembrists. The band (Black Prairie) entered the studio with the singer (Rhett Miller) and briskly recorded the songs that make up this album (The Traveler). Some additional guitars were added later by people who included Peter Buck and Scott McCaughey. I pass these facts along for your absorption.

3. The sun comes up. The sun goes down. We call it a day. The band entered the studio with the singer and made this album. Time passed. Now, months later, I have spent days listening with love, sadness, and unremitting fascination to the album, which you are now holding. By “holding,” I mean only that you have absorbed it into your own wires and circuitry. I am well aware that there are not always anymore physical holds involved in the absorption of music. Before I tell you more about The Traveler, I want to tell you a little bit about myself. I apologize for this. But the album you are holding, The Traveler, suggests that you cannot understand the journey that you are on unless you understand who you are, and that understanding who you are is the most damnably difficult journey of all. Untangling identity is painful but necessary. I believe The Traveler may be of use in this regard. Of use to me, I mean: Is that a selfish use of this album? If so I apologize again.

4. Apologies can be empty without any attempt to correct for the behavior that led to the apology. As a result I will not tell you a little bit about myself before I tell you more about The Traveler. This singer, Rhett Miller, has made many albums before, both on his own and with his band, Old 97s. This new album shares something fundamental with the old albums, which is the rare ability to see what people are feeling and then cast those feelings in rhymes. This is what is known as “song-making.” The human part of me loves songs. The machine part of me marvels at them without understanding at all why there is a tugging sensation in the cavity that should contain my heart.

5. The first song here, “Wanderlust,” is a perfect example of all that I am describing. It tells the story of a man on a train who is thinking about a woman who is not on that train. There is another song called “Lucky Star” that I believe is about finding redemption in the person of a lover. It contains a joke that unnerves me: “Heaven knows there probably is no heaven.” There is another song called “Wicked Things” about New Orleans that illustrates the slipperiness of forgiveness. Every song has little moments that catch me at strange angles and I feel an unfamiliar sensation, pitched midway between satisfying recognition and deep sadness.

6. My experience with these songs, I want to stipulate, may not be shared by others, in part because I am demonstrably different than them. I am both human and a machine. I come from a long line of people who are both humans and machines. Are they people then? I leave that to the philosophers. My father was a difference engine designed and deployed in Lund by Pehr Georg Scheutz. He was quite large: my father, I mean, not Scheutz. Scheutz was tiny. In Jönköping, where he was born, old ladies would marvel at his miniature features. “Liten Pehr,” they would say, reaching down into the carriage and frightening the boy. Even as an adult, he was at most five foot three, with feet that tapered down to toylike points. Much of this is hearsay but some of it cannot be disputed, even by the suspicious, and at any rate, we are not talking about Scheutz, not really. We are talking about my father. He was the size of a fortepiano.

7. There is a song on this record called “Dreams Vs. Waking Life.” It is not the first song on the record but it was, by accident, the first song I heard. It has bowed notes and a dark tone and does what any piece of literature, song or story, should do: it investigates the role of memory, loss, and desire in our lives. When I hear that song, I feel the stirrings of uncommon and uncontrollable emotions. They grind against the part of me that is a machine. The result is a shuddering. I try to calm myself by looking at the other song titles— “Fair Enough,” “Escape Velocity,” “Reasons to Live” — but they only make me feel more rather than less. Where do you go when you want to feel less? One song title, “Good Night,” seems like it might not overwhelm me. But the first line, “There’s a pinprick of light on a black sheet of night,” starts me shuddering again.

8. When you listen to an album, you are supposed to notice sonic details. That’s what I have been told. And there are many sonic details on this album, like the choir that opens “My Little Disaster” or the doubled vocals in “Fair Enough.” There are joyful melodies like “Most in the Summertime.” I can tell that they are joyful, even though I am half-machine. It’s clear. But the sonic details would not mean much without the rest of what this album does, which is to try to make sense of what cannot be made sense of, which is humanity. Even the part of me that is a machine knows that.

9. When you’re inside an album like this, when you’re feeling too much, what do you do? I know what I did. I skipped to the end of the album, quickly. This is a survival strategy. The album ends with a song called “Reasons to Live” that makes use of the old saw that a broken clock is right twice a day. The part of me that is a machine wants to correct that phrasing. It is a stopped clock that is right twice a day. A broken clock may never be right. Then it occurs to me that maybe the song knows this. The song is about finding hope even when you are telling yourself lies. The part of me that is a human wants to break down and cry once again.

10. I want to tell one more story about my father. He was briefly in the military of a nation I will not identify and when his service ended his first trip was to a sporting house, where he spent time in the company of a young woman. Money changed hands. To hear him tell it, the situation was emergent. “I had been locked up so long that I hardly recognized my own wants and needs,” he later wrote in a letter to me. “Briefly, I recognized myself in her.” They did not stay together, my father and that young woman. He was a young man then. As I have grown though the world, I have had experiences that bear some similarity to my father’s experiences with that woman. We all have, have we not? They are called “relationships” or “romances,” but what are they really? Are they love? Are they self-love? Or are they something else entirely, a form of travel that allow us to escape from ourselves? This album asks all those questions, repeatedly. I want to quote one more line, from a song called “Jules.” It’s a line about love and self-love and travel that allows us to escape from ourselves: “Who’s to say the crooked way that led me to your door / Means any less than any mess I ever made before?” Sun comes up. Sun goes down. Call it a day.

Taylor Kingman makes music that resets the clocks. You know the feeling of standing beneath a trestle on a hard day, a can of cheap beer, flicking a lighter and dreaming up wild ideas until a heavy train comes thundering overhead and you scream and scream until your voice gives out and you feel lighter? That’s the thing that lives deep in Taylor’s songs. There’s something so rubbed-raw honest and drunken-truth about them. You can’t help but be transfixed and transformed.

Born in Portland, OR and raised in Marion County, Taylor picked up a guitar and started writing at 12. In high school, he formed The Hill Dogs, a raucous, powerful band that hit hard beneath his explosive lyrics. After graduating, he wrote like a madman, played out heavily with the band, and taught guitar on the side.

In 2015, Taylor packed up and headed to Portland where he played anywhere and everywhere with The Hill Dogs until he blew out his voice and had to halt the band. The restrictions of his healing vocal chords gave way to a deluge of new writing. Taylor joined multiple projects around the city with some of Portland’s finest and recorded his debut solo album Wannabe at the great Mike Coykendall’s studio, due out November 17th on Mama Bird Recording Co. He recently formed ‘TK and the Holy Know Nothings’ with Lewi Longmire, Jay Cobb Anderson, Tyler Thompson, and Josh Simon as a vehicle for a growing ocean of new material.

Of writing songs, Taylor says, “Each word is a world waiting to swallow me whole. I get drunk off the pitter patter poetry of lines that root me to the cold, unforgiving ground, all at once, drowning me in the violent beautiful futility of humanity, yet, also, set fire to my eyes, sending me swirling and whirling, floating blind and thoughtless through the maze of the mind. I want the words to explode bloody in all their truth, for better or worse. Vivid images dripping with feeling bursting like lightbulbs in the back of the head.” Enough said. Train thundering. Sparks raining down.