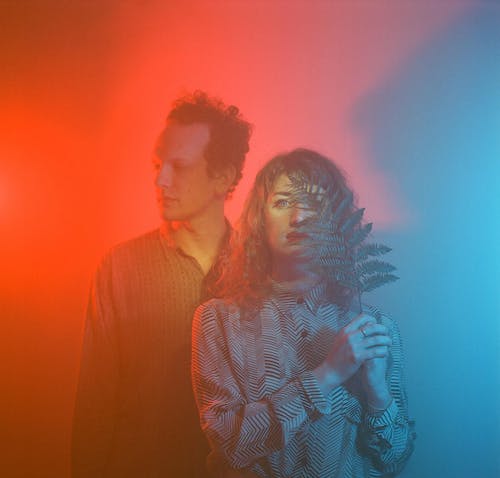 Night Pass is Pure Bathing Culture’s first original album since 2015 and a radiant demonstration of time dutifully spent between releases. The album opens with an anthem of renewal, “Thin Growing Thing” — an intentional choice according to Sarah, who says, “We can’t imagine a better lyric from the album to introduce a listener to what we are trying to say here. Love is something that has the potential to bond us all and where it’s absent we should strive to create it.” This is Pure Bathing Culture’s constant, the conviction that carries them from past to present. To seeds in the soil, Sarah sings:

Night Pass emerged from emotional tumult. The band had lost their label and their team in quick succession, causing them to turn inwards during the creation of this record—the duo’s spirit of resilience beats like a heart through ten powerful tracks, persistence exploding into songs like “Devotion,” a danceable canticle in praise of partnership.

Finding opportunity in the unknown, Pure Bathing Culture called upon friend and producer Tucker Martine (REM, My Morning Jacket, Neko Case and Spoon) to join their journey. His studio, became an oasis, a place of healing and of progress. This darker incandescence of collaborative survival gleams through “Moonrise,” “Remember” and “Joyous Lake,” the last of which provided Night Pass its title. “It’s our favorite song on the record,” Daniel and Sarah confess in agreement. “It’s a meditation on patience and not giving up.”

the joyous won’t be jealous of // the heavens up above

in stream lit skies mysterious // above the joyous lake

Musically, Pure Bathing Culture emanate an expertise in sounds supernatural and ethereal. Sarah ignites lines with a voice like sorcery, injecting each note with palpable energy. Daniel embraces his instruments as companions. He explains, “I don’t plan, I just think of each part as a different person. I'll name them, think of the clothes they're wearing, where they're from ... This helps me feel like we’re creating our own world.” His method is evident in “Ad Victoriam,” where sounds interact like living, loving bodies, and in “All Night,” where Sarah’s voice seems to twirl each melodic layer as if by hand.

If Night Pass clarifies only one thing, it’s that over the course of their Richard Swift-produced debut EP and the two beloved studio albums that followed, Sarah Versprille and Daniel Hindman have done more than establish a musical identity; they’ve honed a sonic virtue. The album is a shining exhalation, beaming with electric intimacy and propelling Pure Bathing Culture into due triumph. The album closes with “Violet A Voyager,” a softly resolving song that Daniel and Sarah always knew would come last, the first glimpse of violet on the horizon after the black of night.

The coming together of Rebecca Marie Miller and Joy Pearson as Portland, Oregon’s Lenore., was serendipitous, to say the least. After individually hitting rock bottom — Pearson following a divorce and Miller after a period of destitution in LA — the pair separately turned to songwriting in their search for still points in a turning world.

After many miles and moons spent lending their abilities to other projects, they finally found themselves spinning on the same axis when a chance meeting sparked an immediate connection. A drunken night ensued and before they’d even scoped each other’s material, they'd committed.

Just three years after that fateful evening and Lenore. can boast having performed at legendary PNW venues including Portland’s Mississippi Studios, Aladdin Theater, and Revolution Hall; as well as Sunset Tavern, Fremont Abbey, and Tractor Tavern in Seattle. They've toured nationwide and have opened for critically acclaimed artists Eric Bachmann, Laura Gibson, Josiah Johnson, and The Mynabirds. They’ve also performed on stage with musical heroes like Chris Funk and Jenny Conlee of The Decemberists and Peter Buck of R.E.M. In August 2018, Lenore. was invited to play Traveler's Rest, a festival curated and headlined by The Decemberists, alongside acts that included Mavis Staples, Death Cab For Cutie, Jeff Tweedy and Tune-Yards. Most notably, in July 2019 Lenore. will make their debut appearance at the iconic Newport Folk Festival, performing on the For Pete’s Sake stage, named in honor of folk hero Pete Seeger.

Miller and Pearson initially formed Lenore. as a duo, but have long since gained full-time collaborators in seasoned Portland musicians Edward Cameron (classical guitar), Jessie Dettwiler (cello) and Austin Christ (bass and electric guitar). While Miller and Pearson share the songwriting duties, each member of Lenore. contributes significantly to the band’s sound – A dreamy and ever-evolving, melancholic yet hopeful, blend of harmony-driven folk.

Combining boundless creative imagination with a deep reverence for American folk, blues and country music, MARISA ANDERSON's guitar playing is fluid, emotional, dexterous and original. Signal to Noise magazine calls Anderson's guitar work "Utterly fabulous", TIme Out London refers to her playing as "Stunning…haunting and evocative", Pitchfork calls her latest record, 'Mercury', "Brilliant" and Wire Magazine says, "Her sound has strength in restless variety…Anderson's playing is heartfelt and utterly American, free from grandstanding and steeped in respect for the old tradition." Before going solo in 2009, Anderson played guitar in the Dolly Ranchers and the Evolutionary Jass Band. In the past two years, Anderson's music has landed her festival appearances in Europe and the United States and opening slots for artists including Godspeed You! Black Emperor, The Devil Makes 3 and Sharon Van Etten. In August 2013, KBOO Community Radio released a split 7″ featuring Anderson and Elizabeth Cotton. Anderson's music has been featured on NPR and on soundtracks including 'Smokin' Fish', 'For the Love of Dolly', 'Girls Rock', and 'Gift To Winter'. Her writings on music and activism have appeared in Bitch Magazine, Leaf Litter, and in Rock 'n' Roll Camp for Girls, the book. Her new album, "Traditional and Public Domain Songs," is now available from the Grapefruit Record Club.