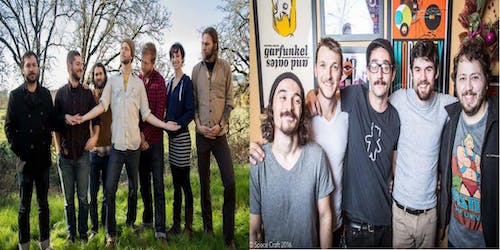 One Night Only - A Jackalope Reunion with The Weather Machine

Over the past decade, The Jackalope Saints built their reputation on stages across the Pacific NW, whether performing alongside acts like The Infamous Stringdusters and Hot Buttered Rum, or at festivals like Northwest String Summit, Treefort and Wildwood Music Fest. Following an extraordinary night with Jeff Austin Band at Mississippi Studios in 2017, the band took an indefinite hiatus. April 10th at Polaris Hall, The Jackalope Saints reunite for a final farewell, joined by fellow Portland favorites, The Weather Machine.

We are The Jackalope Saints, hailing from Portland, Oregon. Our sound is folk music fashioned to bluegrass and hammered to the floorboards of forgotten barns, winding through overgrown valleys where ailing giants sleep their lives away. Cut from six cloths, forging original music, reminiscent of forest fires and screen doors slamming.

On April Fools Day 2013, Portland-based project The Weather Machine released their first full-length album after a blustery winter of recording on the Oregon Coast. With its strong ties to the region, the band roots itself firmly in a Pacific Northwest folk aesthetic, but holds on tight to a hard-hitting love for alt-rock. The result is wonderfully hard to categorize – The Weather Machine has been compared to everything from The Kinks and Josh Ritter to Hey Marseilles and Cake.