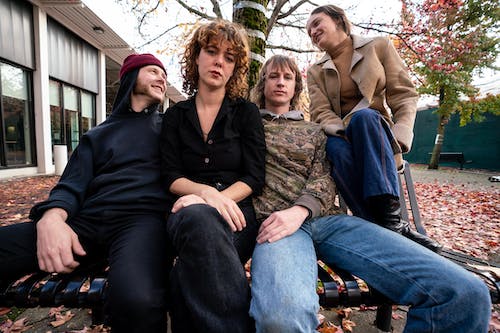 The Olympia, WA based four-piece Oh, Rose has solidified their place in the PNW music scene through powerful, upbeat performances showcasing the emotive and unfiltered voice of frontperson Olivia Rose. Their catalog is both intimate and explosive; since forming in 2014, the band has released two albums and an EP, amassing a catalog that ranges from soft, synth-tinted love songs to full-on, painfully screamed ballads. Their latest release, While My Father Sleeps via Park the Van Records, tells the complex story of family, adversity, love, and friendship, while also serving as an homage to Rose’s mother, who passed away in January of 2017.

"The songs feel like a joke at your (and their) expense, and the band- a playful group of disgruntled art school students and cyber terrorists reveling in the jest"

YUVEES were born to the brothers Broome in Columbus,OH in 2016. In an effort to escape their quickly deteriorating environment, they fashioned a live-in tour vehicle (with former drummer Justin Barlow) and set sail on what was supposed to be a never ending tour supporting a hastily made living room demo. Eventually, the vehicle died in Silver City, New Mexico and the band was retrieved from the desert by a close friend. They managed to continue traveling till funds & shows dwindled, landing them in Portland, OR. They recorded the EP "Seething in whisper town" in April of 2018 before the departure of drummer Justin Barlow. The band currently gigs in the pacific northwest with a new line-up poised for an upcoming tour and LP. The band seamlessly transitioned from a stark and barreling 3 piece, to a playfully noise-laden, dance-driven 5 piece with the addition of Samantha Oxley, Danny Welch(Old Outfits) & Riley Mclaughlin.

YUVEES are known for their chaotic, quirky performances and have often been tossed about as being a "Mutant Disco" or a "No Wave" band.

"Seething in whisper town" was recorded by Adam Becker at Red Lantern studios in Portland,OR and mastered by Ryan Foster at Foster's mastering in Portland,OR.