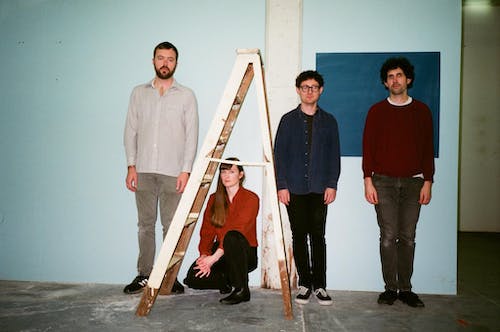 Lithics is a four person minimalist punk band from Portland, Oregon formed in late 2014. Over the last year and a half they have refined a sound focusing on interlocked bass and drum rhythms paired with shrill guitar counterpoint and stark female vocals. While counting Wire, The Fall, Devo, Pylon, The Shadow Ring, and Captain Beefheart’s Magic Band as reference points, the band’s concerns are contemporary and urgent. An injection of uptight, nervous energy into the reverb drenched complacency of today’s musical underground.

“...basically the stuff of my post-punk dreams, with needles-and-pins guitar lines jabbing and competing for space with minimalist, meditative bass/drums synchronization and coolly detached female vocals that drift somewhere between the twin inspirations of Allison Statton of Young Marble Giants, and Vanessa Briscoe of Pylon. Throw in some hair-raising neo-no wave scratches and scrapes of six string across the otherwise steady and taut rhythmic throb of ‘Lizard’ and ‘Seven People’ and you’ve got a band who should be making all the weirdo art-punk kids drooling over that CCTV single similarly lose their shit, if they know what’s good for them.” - Erika Elizabeth, Maximum Rock ‘n’ Roll #392.