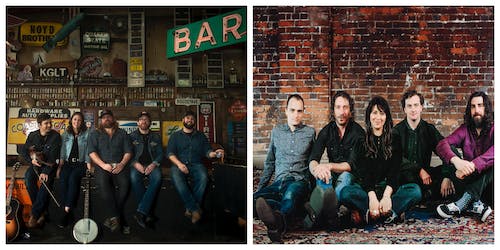 Laney Lou and the Bird Dogs / Never Come Down

Laney Lou and the Bird Dogs are an energetic Americana-Folk band that infuses four-part harmonies, engaging songwriting, and rock-n-roll drive into a modern approach to traditional folk music.

The Bird Dogs have been taking their infectious sound on the road since 2013, sharing stages with the likes of The Travelin McCoury's, The Nitty Gritty Dirt Band, The Jeff Austin Band, Amy Helm, Leftover Salmon, The Infamous Stringdusters, Billy Strings, Blitzen Trapper and many more.

The Bird Dogs released a live self-titled studio album in 2016, recorded at Basecamp Studio in Bozeman. Their follow-up album, titled The Vigilante Session, was recorded live at a forest service cabin in the Ruby mountains. In February 2019 Laney Lou and the Bird Dogs recorded their first full-length studio album, Sweet Little Lies, at Prairie Sun Records in Cotati CA. They worked with producer and engineer Brad Dollar, and released the album on May 3rd 2019.

These lyrics from the song Chances on their self-titled debut album have become a mantra for the members of Never Come Down. As bandleader Joe Suskind puts it, “This band was born out of taking risks. We all felt the pull to take a chance on our music and each other, so we left our day jobs behind and hit the road. We’re taking a real swing at it.” Earnest songwriting, dedication to craft, and genuine care for the music is at the forefront of what Never Come Down does. “We never tell each other what to play; as a group, we can feel it when the music is right.” It’s that feeling that Never Come Down creates that has captivated audiences from the onset and is now drawing national attention.