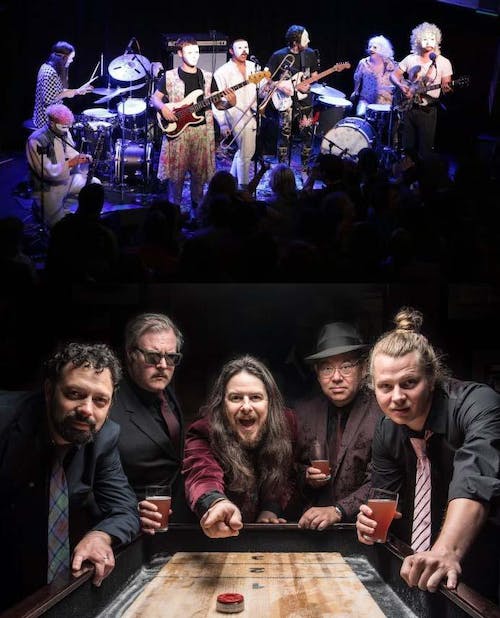 Kulululu / Maurice And The Stiff Sisters

Maurice And The Stiff Sisters

The songs range widely from catchy pop and cheeky sambas to 6/8 soul ballads and jet-takeoff psych-rock. Audiences are treated to a showcase of airtight, danceable rhythms, the crack horn duo of Bryant Byers (trombone) and Aaron Mattison (tenor saxophone) and a heavy dose of wailing 12-string guitars and flying hair provided by Maurice himself.

"toyboat toyboat toyboat" is a four-piece rock band with punk, avant-garde, samba, Turkish, jazz-funk, and indie-rock influences. The group began when Travis responded to an invitation from Mehmet to make weird music inspired by John Zorn. The pop sensibility was added by Hank (guitar and bass) and Danny (Quintronics Drum Buddy and keyboards).

Mehmet (a drummer from Turkey with a doctorate in computational ethnomusicology) has an extensive history of playing samba, folkloric taiko, Afro-Cuban, rock, jazz and metal. He has performed numerous times with Pink Martini, as well as one-offs with Fishbone, Obo Addy, The Dandy Warhols, and Brazil’s Olodum, and appears on Mirah's 2009 record "(a)spera" with members of The Decemberists and The Haggard.

The band recently kicked off Pere Ubu's 35th-anniversary tour at Doug Fir, and has played venues all over the west coast such as Mississippi Studios, Someday Lounge, Dante’s, Rotture and The Know in Portland, the Funhouse and 2bit in Seattle, the Stork Club in Oakland, the Hemlock Tavern in San Francisco, and numerous other venues in Idaho and Oregon.

Audiences describe them as "Miles meets Fugazi,” “Zappa meets Devo” and “Afrobeat meets the Melvins.” The blog at allmusic.com says: “If Raymond Scott, Martin Denny and Bootsy Collins decided to form a band at Ennio Morricone’s house, it might sound something like toyboat toyboat toyboat.”

The music is heavy, danceable, and out of the ordinary. The group combines the conventional rock 'n roll sound with uncommon instrumentation, including electric trumpet and the Drum Buddy (a rare photo-reactive Theremin/synth/turntable/drum machine invented by New Orleans musician Quintron).