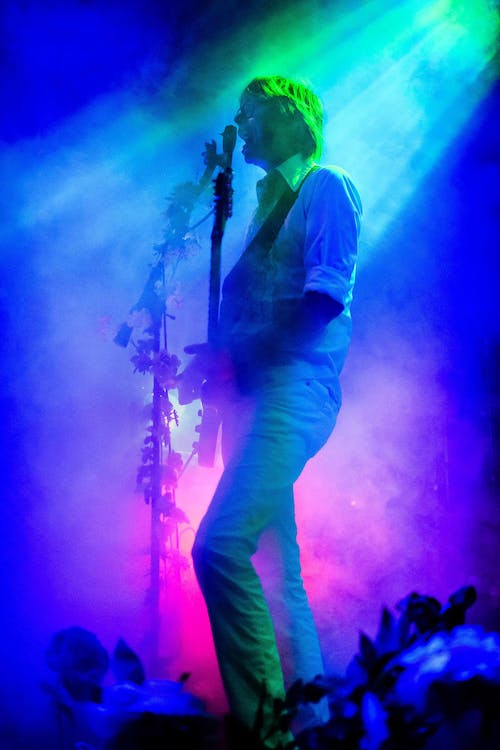 Daniel Riddle, the Portland, Oregon based musician, producer and master level wizard, has been creating music as King Black Acid since the late ‘80s. Riddle began KBA’s long and winding musical journey as a bedroom project while serving as the bassist for the seminal Portland punk act Hitting Birth. Soon the project began to take on a life of its own developing into a fully realized, ever evolving, powerhouse of neo-psyche rock and birthing a multiplicity of sonic universes in the ears and minds of those open to experiences beyond the realm of the ordinary. With four studio albums, a multitude of singles and original musical score for productions such as The Mothman Prophecies, Buffy The Vampire Slayer, CSI Miami, Dream With Fishes, The UnderWorld III Rise Of The Lycans and revered live performances, King Black Acid has become a Portland legend – an act that consistently recreates itself by breaking stifling musical parameters all the while managing to throw so many catchy hooks that any attempts at escape are rendered useless.

King Black Acid and The Rainbow Lodge is the full name of the current KBA line up, and, as always, consists of Riddle (who provides most of the writing, guitar, voice and production) along with a group of skilled players handpicked to bring this music to its ultimate expression. Each incarnation of KBA’s reign is constructed to play to the strengths of the assembled personnel (notable former members from a long list of luminaries include Scott Adamo of The Wipers, Joseph Trump of Pigface and Elliot Sharp’s Carbon, Nathon Jorg of Snowbud and the Flower People, Dan Eccles of Richmond Fontaine and Fernando and Jeff Trapp of Everclear), displaying a sound uniquely its own and simultaneously one that is bound by Riddle’s emotionally charged songwriting and his signature approach to sonic creation. Fittingly, each materialization of King Black Acid has been marked by a different band name – a typographical signpost directing the unconscious to aural worlds beyond our own.

From 1995’s KBA and the Womb Star Orchestra’s lush, epic, long form jams that cemented the outfit’s place in the Space Rock Hall Of Fame and entranced all the whacked out kids in the underground of the Pacific Northwest and beyond, to the tightly refined psyche sounds of the turn of the millennium manifestation KBA and The Starseed Transmission, through the dark soundtrack work of KBA and the 144,000 Piece Acid Army, to the current line-up, the strange and beautiful sounds from Riddle’s heart, mind and soul pour out of the King Black Acid laboratory directly into the bloodstream.

The Ghost Ease revel within the warm folds of a sort of soft savagery, pin-pricking holes into the fabric of the astral veil, and creating hypnotic, raw opuses by way of heavy guitars, frenzied drums, and lilting vocal timbres.

Residing somewhere on the spectrum between New York no wave and Manchester post-punk, one can hear influences as broad as Sonic Youth, Yoko Ono, ESG and Magazine.

“Sabatino's fretwork aims for what Built to Spill may have sounded like had they signed to 4AD” - Pete Cottell, Willamette Week

“Miss Rayon’s debut LP, Eclipse, is a funky and dissonant gem that calls to mind some of the best qualities of Reagan-era Post Punk. -Christopher Klarer - Eleven PDX