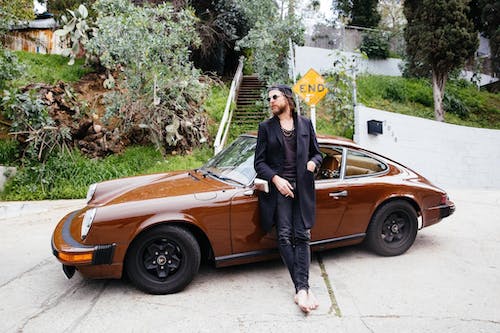 Fanfare, the second full-length from acclaimed artist and producer Jonathan Wilson, was released in October 2013 via Downtown Records.

Wilson’s follow-up, Fanfare, was recorded over a 9-month period at his Fivestar Studios in Los Angeles and features contributions from Graham Nash, David Crosby, Jackson Browne, Josh Tillman (aka Father John Misty), Wilco’s Patrick Sansone, Dawes’ Taylor Goldsmith and Mike Campbell and Benmont Tench from Tom Petty and The Heartbreakers. The album is an ambitious, epically grandiose rock production that has conjured notions of Dennis Wilson’s Pacific Ocean Blue amongst more than one music journalist.

“I was going for this sort of ‘widescreen’ sound, a blown out vista. I wanted strings, horns, bells, vibes, voices, solos, improvisation and a full orchestra on some of the tunes,” says Wilson. “There were a few weeks of sessions with the band tracking live, as well as many weeks with just myself and engineer Bryce Gonzales. There were also many weeks at a time of just me working alone, as I did with Gentle Spirit. I’ve always worked alone in some capacity since I first started recording, it’s a very important part of the process for me.”

Prior to beginning work on Fanfare, Wilson spent the prior 18 months touring the world with his band to support his debut album, which included invitations to tour with legendary superstars such as Neil Young and Crazy Horse and Tom Petty and The Heartbreakers, and notable contemporaries including Wilco and Tame Impala.

Born and raised in North Carolina and now based in the Echo Park neighborhood of Los Angeles, Jonathan Wilson moved to Los Angeles in 2005 and is credited with reviving the neighborhood’s once-legendary music scene. As a sought-after producer, Wilson’s recent work includes albums by Father John Misty and Dawes.

Originally from Texas, Josh T. Pearson formed the short-lived phenomenon that was Lift to Experience, who released one sprawling masterpiece, 2001's The Texas-Jerusalem Crossroads, before splitting up soon after. So beloved by John Peel were they that he had them record three sessions in five months and were included in the Best 125 Peel Sessions of all time - http://www.bbc.co.uk/radio1/johnpeel/sessions/top125/

Since then, Josh T. Pearson has spent many years in the wilderness, only releasing one studio recording, I’m So Lonesome I Could Cry, a split 7” single with the Dirty Three and appearing on the Mercury Prize nominated Bat for Lashes album Fur and Gold.