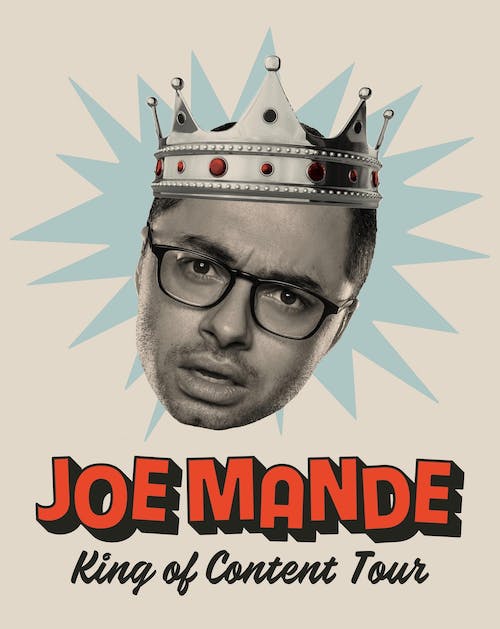 On his new King of Content Tour, Joe Mande travels all over America in an heroic attempt to heal a broken nation with his patented mix of humor and content.

Joe Mande is a multi-talented comedian/writer/actor known the world over as Hollywood’s “King of Content.” His Award-Winning Comedy Special can be seen on Netflix. His acting has been featured on Modern Family, Parks and Recreation, Brooklyn Nine-Nine and in the film The Disaster Artist. And his writing credits include The Good Place, Master of None, and Kroll Show. Now is finally your chance to see some of that famous content, live and in person.

Kirsten Kuppenbender is a goddamn Power House, with a heart made of precious metal. She's a comedian, a writer, an actor and is the visionary of a comedy revolution. Kupp's comedy has been described as "observational, with bouts of off-the-cuff brilliance". As a host, she has been deemed quirky, bubbly and "completely out of control" by guests and performers alike.

Kupp is the Founder and Producer of Lez Stand Up: a Portland-based, all-queer, feminist comedy collective and showcase. LSU has been voted Portland's Funniest Comedy Event for 3 years in a row (2016 through 2018). Kupp is especially proud because Lez Stand Up is her baby.

You may have seen her in Bridgetown Comedy Festival, All Jane Festival, hosting Hump! Film Festival, or The State of Period with Margaret Cho, or maybe when she opened for Emily Heller, Michael Che, DeAnne Smith or Fortune Feimster! Kupp gets around!