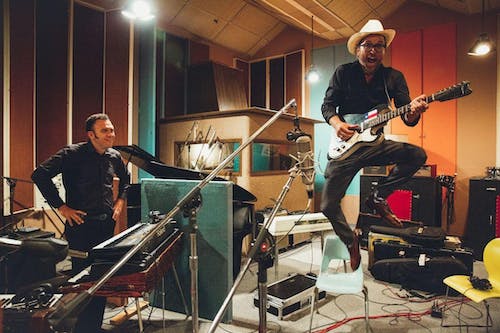 Greyhounds are the Austin trio of Anthony Farrell (vocals, keyboards), Andrew Trube (vocals and guitar) and Ed Miles (drums). Many music fans remember Farrell and Trube as key members of JJ Grey's band MOFRO for many years. After parting with Grey in 2016 to focus full-time on Greyhounds, the band has only left the road to record and release two full-length records.’

In 2016, while recording at Sun Studios for the PBS series "Sun Studio Sessions", Greyhounds met Memphis native and acclaimed engineer, Matt Ross-Spang. Soon afterwards, Matt moved his operation to the newly refurbished Sam Phillips Recording studio. Greyhounds were familiar with the studio, and its deep history, and had always wanted to record there. It is the type of space that transports you to another era; the perfect place to make the type of record Greyhounds were interested in making: a less produced, and more spontaneous style of recording, all straight to tape like many of the classic music that was made there in its heyday. And Ross-Spang, is the perfect engineer, steeped as he is in the old school style of making records.

Pulling from 17 years of songwriting, Trube and Farrell had plenty of material to choose from. "It was a chance to look back at some of our favorite tunes that we had never recorded" says Trube. Because there were only 3 days in which to record and mix the record, Greyhounds knew they would have to be ready to perform these songs seamlessly, just like they would at a live show. "When recording to tape you have to make commitments. It is a lesson in letting go and not getting hung up on things. Its liberating."

​13 songs were recorded and mixed over the course of those three days. There were special guest appearances from some of their good Tennessee friends Dante Schwebel, Will Sexton, Amy LaVere, and Art Edmaiston. "When you are going at that pace, you don't get a lot of time to second guess yourself. You learn to trust your instincts and be more present in the moment." says Farrell of the breakneck pace of recording.

​Cheyenne Valley Drive is a product of a band at the height of their game, making music in a studio that has been virtually untouched by time, recording in the style that many of their musical heroes used. Basically a dream come true. A dream they want to share with you.

Seattle based singer-songwriter Caitlin Sherman has had her fair share of collaborations. From the moody experimental folk of Slow Skate, to electronic noir with Lusine, and most recently a cosmic country partnership in Evening Bell, she has lent her skills to a variety of partnerships. And so in a "about damn time" kind of moment, she's stepping out solo. Think NW rocker trapped in the body of a honky tonk angel with the voice of a classic torch singer.

It’s been quite an evolution for this native New Yorker. From singing gospel music in his father’s Baptist church to recording contemporary R&B and house music for Epic/550 and A&M Records, valuable experience was gained. Redray then toured the country as frontman of the soulful rock-band “Mosaic” on the H.O.R.D.E. music festival. Through opening for Lenny Kravitz and Blues Traveler, to name a few, Redray gained notoriety. Soon thereafter, he joined former frontman of “The Talking Heads”, David Byrne’s in his touring band from 2008-2010.

While Redray uses all of his influences, his songwriting draws comparisons from Ben Harper to Maxwell. However, his smooth and smoky vocal quality along with his gospel approach set him apart. “I’ve always listened to various styles of music, everything from Curtis Mayfield to the Strokes. It doesn’t matter to me, as long as the music has heart.”

Redray made the journey from New York City to Portland, Oregon late in 2002. Leaving family and band-mates behind, Redray knew he had an opportunity to create something new. Inspired by his change of scenery, he began strumming an acoustic guitar documenting his experiences and emotions. “I embrace playing solo because I hadn’t done it prior to moving to Portland, I consider it a challenge”. You can experience Redray’s rootsy blend of soul singing over sparse guitar strumming at various Portland venues. Whether it’s with a full band or solo, Redray has the innate ability to stir up deep emotion within his audience. You can’t help but nod your head and sway in your seat as you listen to Redray’s heartfelt lyrics and organic vibe.

Redray is currently performing in support of his solo debut cd release “Follow Me” while working on an EP with staples in the Portland music scene(Ezra Holbrook, Matt Brown, Jeff Baxter, and Tom Nunes) scheduled for a summer 2014 release. Look out for Redray Frazier! You will be glad you did.