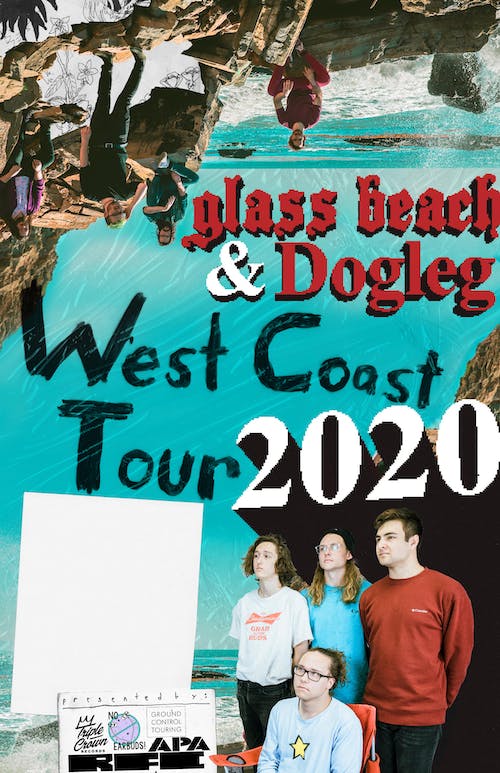 Glass beach was started in 2016 by singer/songwriter J McClendon of casio dad and their then roommates William White and Jonas Newhouse of 8-Bit Johnson. They proceeded to spend the next three years writing, recording, and rerecording several songs which eventually became their debut "the first glass beach album." Shortly after the album's release, Layne Smith of Here Lies the Hero joined originally to play lead guitar for live shows but is now a core member of the band.

"the sound of glass beach is a fusion of our diverse range of influences including 1960s jazz, new wave, early synthesizer music, and emo, but all presented with the harshness and irreverence of punk music. we embrace the trend towards genrelessness caused by the democratization of music brought about by the internet and enjoy playing with musical boundaries even to the point of absurdity."

“Play fast.” It’s a phrase that has been tied together with the experience of Michigan’s Dogleg since the very beginning, when guitarist Alex Stoitsiadis taped the words to his guitar, signifying to the crowd exactly what they were about to be experiencing. Since that time in 2016, the project has gone from a solo bedroom-emo dream to a mature and fierce four-piece punk force, featuring bassist Chase Macinski, rhythm guitarist Parker Grissom, and drummer Jacob Hanlon. In the three years since their inception, Dogleg have been screaming their way out of basements and onto the road with relentless touring schedules, with both crowds and stages growing, and sharing bills alongside the likes of Joyce Manor, Foxing, Oso Oso, Prince Daddy & The Hyena, Thin Lips, and more.

“Fox” — the lead single from the band’s debut LP — conveys a story of anger, anguish, and disappointment in someone that was once trusted. Diving into the song, it’s not difficult to see why fans have fervently latched onto Dogleg. An adeptness at combining anthemic choruses and infectious, danceable riffs with intense emotional messages that regard topics of depression, frustration, loss, and the darkness of self doubt is one of the band’s hallmarks, along with their trademark rhythmic jolts. However, there’s no doubt that Dogleg toys the line with light and darkness very often - the song itself is named after Fox McCloud from Nintendo’s ‘Star Fox’ franchise, and the band is always able to throw in moments of camaraderie and togetherness, as shown by the intense group chorus. In life, the going often gets tough, and the band certainly highlights that. However, they also show the sheer power and intensity that pure, raw emotion has - a power that is able to go from “playing fast” to moving mountains.

In the works for the better part of two years, Dogleg’s debut full-length is due out in 2020 via Triple Crown Records.

Who is Internet Beef?

Internet Beef is made up of a diverse group of people that collaborates in a very special, and beautiful way. The actual band has 4 members: Bobo Lebeef, Jamburger Helper, Chopped Libber, and Dr. Beeflin. Bobo is 1st-gen, Bay area, Hungarian-American, bilingual, power-diva and can play every instrument she touches. Jamburger is an Afro-Caribbean, Miami-native percussion powerhouse that is always the life of the party. Chopped Libber and Dr. Beeflin are the interracial, dueling-shredder, power-couple that started it all. Although each of our backgrounds are considerably different, we work, rehearse, and live like a family. Find us at your local Hooters, carbo-loading before our next sleepover.

Ok, but what is Internet Beef?

Internet Beef is, in its ideal state, a free-for-all art platform. A collaborative brand designed to give legitimacy to the silliest ideas in the Portland art community. It started as a social media tag group for internet arguments, sort of an Avante-Garde meme, and was even rumored for a time to be a cop trying to infiltrate the Portland music scene. (e.g. “Dr. Beeflin often tags Internet Beef beneath actual arguments on Facebook. I don’t even think I understood it was a band when I got followed by it on Instagram. It’s a jackass promotional move at the same time that it’s mocking such tactics. At times it seems almost as much a joke that won’t die as an actual band that plays shows.” –Matt Dinaro – RocknRollPDX)

Over the last two years, Internet Beef has collaborated with musicians, nonprofits, fashion designers, cinematographers, video game designers, painters, tattoo artists, dancers, protesters, restaurants, museums, and anyone willing, in order to be an all-inclusive art force collaborating towards a weirder world and creating a safe space for guilty pleasures.

Musically, Internet Beef has been described as “Nickelodeon of a Down,” and “Queens of the Stone Age but better.” RocknRoll PDX described it as: “The kind of thing you might encounter on Bandcamp, and think, what the fuck is this? Have these people had contact with other bands? All of it is so smart and unique and off-kilter re: good musical taste that it almost scans as bad.”

Internet Beef is a prime example of the power of diversity. While listening, you’ll find spooky Hungarian scales, backed by pumping Afro-Caribbean rhythms and emotionally-charged Mexican melodies, all powered by raw thrash-punk riffs and glittered with psychedelic prog rock. In one word: Extra. Internet Beef shows are theatrical, sexy, loud, emotional, communal, experiential parties that give everyone a chance to participate, dance, lose control, and be a part of something sillier than themselves.

After two years of hard work and several hundred bags of Haribo Gold Gummi Bears, Internet Beef’s first batch of singles are ready for release. DIY as they may be, this EP is designed to make a statement about Portland underground music, redefining the level of professionalism and detail that can come from this community. Internet Beef is a band that calls attention to itself, and these singles reflect that.