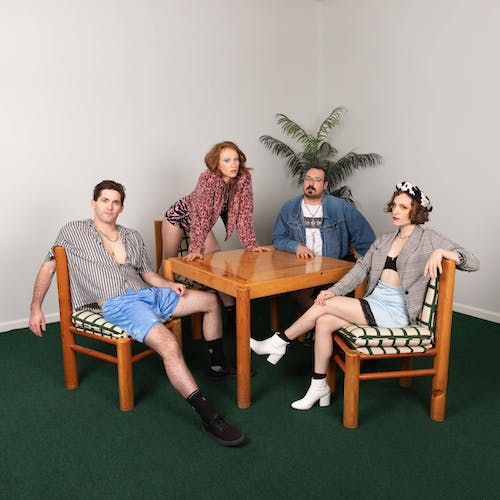 Witty and whimsical French Vanilla have refined their angular, no-wave sonance into a powerfully melodic and disciplined dance party with their sophomore release, How Am I Not Myself? Hitting the ear-waves in June 2019 via millennial, sincere-core label Danger Collective Records (Current Joys, Surf Curse, Slow Hollows), the quartet’s latest work enshrines French Vanilla as vital cultural creators in the vibrant Los Angeles indie music scene and beyond.

French Vanilla got their start playing queer punk parties around Los Angeles in 2013. As their skills developed, they became mainstays at seminal DIY spaces like the Smell and Pehrspace. Influenced by cult, female-fronted post-punk acts, the band partnered with Danger Collective Records in 2017 for their self-titled debut, which Bandcamp named as one of the 100 best albums of the year. Their captivating stage presence and avant-garde stylings have earned them coveted bill pairings with headliners such as ESG, Shonen Knife, Shopping, the Make-Up, Priests, Chastity Belt and Bow Wow Wow.

With a record out, the group quickly picked up momentum. A favorite amongst a subset of LA-based musicians, French Vanilla enjoyed numerous tour offers throughout 2017 and 2018. They first hit the road with local music scene comrades Girlpool and Surf Curse and subsequently embarked on a cross-country tour with Wavves and Joyce Manor. The band then joined YACHT for a West Coast sprint before wrapping up the first half of 2018 with a SXSW appearance and a national tour supporting British post-punk darlings Shopping. French Vanilla thrives on a shared sense of humor, a glue that keeps the group together. Hardcore fans avidly follow the band’s ambitious reality show parodies and mockumentaries, produced via Instagram stories while on tour.

Enlisting the talents of engineer and producer Sean Cook (St. Vincent’s MASSEDUCTION) at Sargent Recorders studio for How Am I Not Myself?, French Vanilla take a soft left at the intersection of Mika Miko and the Waitresses to incorporate an almost B-52s meets Romeo Void-ish landscape. Theatrically fronting the alliance, Sally Spitz mesmerizes with disco aerobics and dynamic vocalization replete with chants, whoops and falsetto trills. She studied performative language under groundbreaking artists Barbara Kruger, Catherine Opie and Stanya Kahn, and it shows. Guitarist Ali Day shifts from angular post-punk driven jabs, familiar in the first album, solidly into new territory with more polished, elaborate melodies. Weaving fluidly throughout the current album, Daniel Trautfield’s playful bursts of saxophone remain the band’s not-so-secret weapon. Eschewing clutter and honoring space, the streamlined compositions give drummer Greg Shilton (of local DIY acts Heller Keller, Peter Pants and Post Life) room to shine and bring a welcomed fullness and complexity to the rhythm section.

French Vanilla entertains and challenges its audience with a seamless fusion of creativity and progressive concepts born of lived experience. Trautfield organizes for incarcerated women and transgender people, and Day works in the realm of affordable housing and homeless services. Three members of the band identify as queer, and there most definitely is dancing at their revolution. Even the album’s title, How Am I Not Myself?, questions identity and the disparity between the eye of the beholder and the beheld. With soaring and addictively catchy vocals, Spitz explores the fears and freedoms of major life upheavals, the drag of gender bias in the creative landscape, and the struggle to psychically survive a sexist and heteronormative society.

The album’s first single “All the Time,” follow-up single “Lost Power,” and the dance hit “Real or Not” trace Spitz’ emotional journey shutting the door on a long-term, straight relationship while opening a new one with a woman into a previously-suppressed facet of her identity. “Suddenly,” another serious foot-mover, addresses misunderstanding and loneliness—especially for female protagonists—inherent in the chasm between public persona and the interior self. Imagining a new narrative and canon, feminist conceptual songs like “Joan of Marc” and “Move Along, Move Ahead” challenge traditional storytelling that has failed to center women’s perspectives and experiences. “Friendly Fire” depicts the Mars/Venus, sleeping with the enemy predicament women often face in straight relationships, while “Bromosapien” laments sexism in disguise that women feel but can’t prove. Still, How Am I Not Myself? culminates in hopeful, lyrical agency: “I saw the future. I held it up to my face. It was absolutely fascinating.”

Ultimately, in How Am I Not Myself?, French Vanilla showcases its expansive capacity to generate infectiously danceable tunes while tackling the complexities of identity, imagination and voice from a marginalized perspective. Instead of dwelling on mainstream rejection, the band of misfits celebrates the excitement of life on the periphery to a pulsing, experimental beat.

Plastic Weather is a five-piece synth-punk band from Portland, Oregon that was formed in 2016. They craft a unique blend of post-punk, electroclash and no wave to create spooky yet danceable tracks.

Their 2018 self-released and self-titled EP is four tracks of synth-driven disco-punk that focus on themes of dismantling the patriarchy, the fleetingness of existence, and evil spirits that follow you around in the woods.

Plastic Weather draws inspiration from post-punk groups like Pylon, Le Tigre, and The B-52’s, and they seek to continue the legacy of feminist dance punk.

Their live performances are a visual spectacle to behold featuring performance art elements throughout the live set. This has in the past included actors eating baked chicken on stage, or dancers moving trough the crowd while draped in plastic shower curtains.