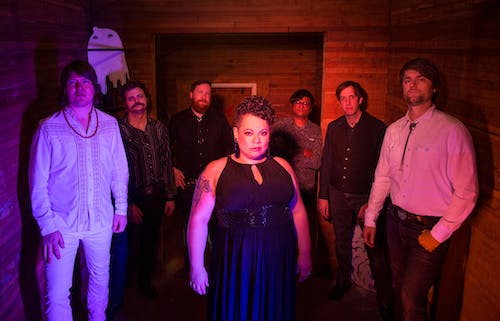 The epic Portland spaghetti Western orchestra with a new LP, 'No Justice'

Spare yet sumptuous, distilling the lean, gritty essence of grindhouse anomie and wielding orchestral flourishes of widescreen delicacy, No Justice feels like the defining statement of a band fully-realized – a sultry, restless stormcloud arising from the darkness at the edge of town to draw forth the fated reckoning.

Federale has always told stories through music, of course, but fans hadn’t much opportunity to parse lyrics within the band’s first two albums. La Rayar: A Tale of Revenge (2008) and Devil in a Boot (2009) spun blood-soaked yarns through music alone – concertedly-cinematic soundscapes of rumbling riffs, plaintive whistling, and soaring soprano vocals soundtracked the most captivating spaghetti westerns that never were. Hegna, already entrenched within the Brian Jonestown Massacre and soon to become longest-tenured bassist of Anton Newcombe’s famously-troubled psych-rock revue, made clear from the start that Federale existed purely as an instrumental project. Still, certain projects defy even the strictest of boundaries. Three years later, The Blood Flowed Like Wine (2012) brought along guest appearances from frontmen KP (Spindrift) Thomas and Alex (Black Angels) Maas. After a string of notable shows -- The Fillmore, Crystal Ballroom, Henry Fonda Theater -- they earned a reputation for live performance, and Hegna took to the mic himself for much of 2016’s All The Colours Of The Dark. By now, learning that No Justice contains only a pair of vocal-less tunes shouldn’t seem any more surprising than news that its release has been scheduled for Mexico City – first stop along a summer filled with festival appearances up the west coast from Austin to Seattle. (The Portland, OR hometown faithful must wait til November 23rd for Portland’s No Justice show at Mississippi Studios.)

Embracing the enormous scope of orchestral cinematic production courtesy of members of the Oregon Symphony, Federale has honed a taut, gleaming precision from their signature sound. When Collin Hegna’s honeyed baritone waltzes with the operatic wizardry of bandmate Maria Karlin, the finely-etched lyrical depths fortify Federale’s cinematic sway. Spare yet sumptuous, distilling the lean, gritty essence of grindhouse anomie and wielding orchestral flourishes of widescreen delicacy, No Justice feels like the defining statement of a band fully-realized – a sultry, restless stormcloud arising from the darkness at the edge of town to draw forth the fated reckoning. With ‘Trouble’, the album’s single, Hegna imagined a Lee Hazelwood and Nancy Sinatra song put together with a Serge Gainsbourg duet. I just started playing around with these two concepts, and this weirdly interesting mix came out – as if Lee Hazelwood was singing with Jane Birkin. The song fully switches from 70s cowboyish into full-on Gainsbourg. The femme fatale, Maria, even sings the lyrics in French – I went that far.”

“A lot of the songs are about things that could be perceived as unjust or unfair,” explains Hegna. “It’s not commentary so much as observing inequality as it happens to be and telling stories about that through the lens of frontier justice. There are always parts of life that are out of one’s control. Look at the album cover. That’s definitely a metaphor, but I wouldn’t say it’s about me so much as the world. Lord knows, enough folks are getting fucked way worse than me. I'm purely observing things as they have always happened. In nature, sometimes you’re a hawk and sometimes you’re a cute bunny that gets turned into hawkshit. It ain't fair, but that's life. Just because things feel fucked doesn’t mean you can’t make something pretty at the same time.”

A forthcoming video for ‘Trouble’, shot by veteran Pickathon chronicler Melissa Walther, captures the band performing in concert at Portland’s Doug Fir. Soon after, they’ll release a ‘Fire On The Hill’ clip by director Brett Fallentine featuring footage from his film of the same name – a recent Los Angeles Film Festival award-winning documentary about the Black cowboy community that’s grown up around a century-old Compton horse stable. For a band that set out to score non-existent movies, it stands to reason that actual directors would come calling, and a steady stream of inquiries followed Hegna’s bravura collaborations with tastemaker darling Ana Lily Amirpour on 2014 indie smash A Girl Walks Home Alone At Night and 2016 Keanu Reeves/Jason Momoa cannibal romp The Bad Batch. (At least one track’s already been completed for her 2020 release Kate Hudson/Zac Efron fantasy-adventure Blood Moon.)

Plastic Cactus is a dark desert-surf band from Portland, Oregon.