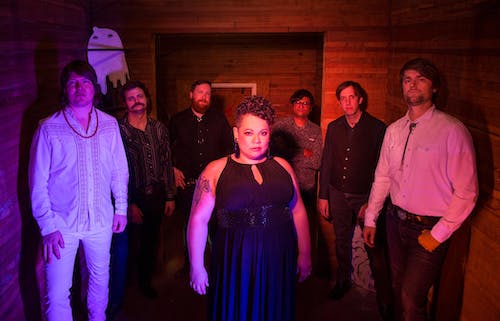 As a mournful whistle carves through fevered melancholia, the first stirrings of No Justice’s title track evoke the mean streets and rusted prairies of a blighted small folk roiling with palpable desperation. Embracing the enormous scope of orchestral cinematic production while subduing the bombast of electrified riffage, longtime Brian Jonestown Massacre bassist Collin Hegna has honed a taut, gleaming precision from his passion project’s signature sound. When his honeyedbaritone waltzes with the operatic wizardry of bandmate Maria Karlin, the finely-etched lyrical depths fortify Federale’s cinematic sway.Spare yet sumptuous, distilling the lean, gritty essence of grindhouse anomie and wielding orchestral flourishes of widescreen delicacy, No Justice feels like thedefining statement of a band fully-realized – a sultry, restless stormcloud arising from the darkness at the edge of town to draw forth the fated reckoning.

Federale has always told stories through music, of course, but fans hadn’t much opportunity to parse lyrics within the band’s first two albums. La Rayar: A Tale of Revenge (2008) and Devil in a Boot (2009) spun blood-soaked yarns through music alone – concertedly-cinematic soundscapes of rumbling riffs, plaintive whistling, and soaring soprano vocals soundtracked the most captivating spaghetti westerns that never were. Hegna, already entrenched within the Brian Jonestown Massacre and soon to become longest-tenured bassist of Anton Newcombe’s famously-troubled psych-rock revue, made clear from the start that Federale existed purely as an instrumental project. Still, certain projects defy even the strictest of boundaries. Three years later, The Blood Flowed Like Wine (2012) brought along guest appearances from frontmen KP (Spindrift) Thomas and Alex (Black Angels) Maas. After a string of notable shows -- The Fillmore, Crystal Ballroom, Henry Fonda Theater -- they earned a reputation for live performance, andHegna took to the mic himself for much of 2016’s All The Colours Of The Dark. By now, learning that No Justice contains only a pair of vocal-less tunes shouldn’t seem any more surprising than news that its release has been scheduled for Mexico City – first stop along a summer filled with festival appearances up the west coast from Austin to Seattle. (The Portland, OR hometown faithful must wait til November 23rd for Portland’s No Justice show at Mississippi Studios.)

Embracing the enormous scope of orchestral cinematic production courtesy of members of the Oregon Symphony, Federale has honed a taut, gleaming precision from their signature sound. When Collin Hegna’s honeyed baritone waltzes with the operatic wizardry of bandmate Maria Karlin, the finely-etched lyrical depths fortify Federale’s cinematic sway. Spare yet sumptuous, distilling the lean, gritty essence of grindhouse anomie and wielding orchestral flourishes of widescreen delicacy, No Justice feels like the defining statement of a band fully-realized – a sultry, restless stormcloud arising from the darkness at the edge of town to draw forth the fated reckoning. With ‘Trouble’, the album’s single, Hegna imagined a Lee Hazelwood and Nancy Sinatra song put together with a Serge Gainsbourg duet. I just started playing around with these two concepts, and this weirdly interesting mix came out – as if Lee Hazelwood was singing with Jane Birkin. The song fully switches from 70s cowboyish into full-on Gainsbourg. The femme fatale, Maria, even sings the lyrics in French – I went that far.”

“A lot of the songs are about things that could be perceived as unjust or unfair,” explains Hegna. “It’s not commentary so much as observing inequality as it happens to be and telling stories about that through the lens of frontier justice. There are always parts of life that are out of one’s control. Look at the album cover. That’s definitely a metaphor, but I wouldn’t say it’s about me so much as the world. Lord knows, enough folks are getting fucked way worse than me. I'm purely observing things as they have always happened. In nature, sometimes you’re a hawk and sometimes you’re a cute bunny that gets turned into hawkshit. It ain't fair, but that's life. Just because things feel fucked doesn’t mean you can’t make something pretty at the same time.”

A forthcoming video for ‘Trouble’, shot by veteran Pickathon chronicler Melissa Walther, captures the band performing in concert at Portland’s Doug Fir. Soon after, they’ll release a ‘Fire On The Hill’ clip by director Brett Fallentine featuring footage from his film of the same name – a recent Los Angeles Film Festival award-winning documentary about the Black cowboy community that’s grown up around a century-old Compton horse stable. For a band that set out to score non-existent movies, it stands to reason that actual directors would come calling, and a steady stream of inquiries followed Hegna’s bravura collaborations with tastemaker darling Ana Lily Amirpour on 2014 indie smash A Girl Walks Home Alone At Night and 2016 Keanu Reeves / Jason Momoa cannibal romp The Bad Batch. (At least one track’s already been completed for her 2020 release Kate Hudson/Zac Efron fantasy-adventure Blood Moon.)

After several years of touring the US, the band has gone from relative unknowns to somewhat cult status, having perfected an infectious and powerful live show that falls somewhere between a demented Roy Orbison and an angelic Gun Club. Their anthems of loneliness, alienation, and triumph have allowed them to artfully navigate through a cluttered underground scene, captivating audiences and transfixing crowds in a nightly conversion ritual. On their newest release, they paint a picture of a world that is truly “fucked,” lacing vignettes of systemic violence, sexual confusion, and class warfare with a wry, suicidal humor straight from the gut of America. “I didn’t see the ascendancy of fascism as anything new here, so my freshest feelings of disgust were toward anyone who could point their finger in one direction and walk away with a smirk on their face.” Charlotte admits. When asked how the punk influence fits in, she smiles, “I don’t align with any genre. For me, the essence of punk is in dealing unflinchingly with the misery and violence of lower-class city life, coming out alive, and wearing your scars proudly.”

Crisis Actor’s birth can be traced back to Charlotte’s time growing up in Southern California’s Orange County; a place where economic exploitation and casual discrimination were intertwined and buried amid a sea of sunshine and palm trees. Eventually she found punk, idolizing Los Angeles bands like X and The Cramps. Nights were spent traveling to the Inland Empire (Riverside County) to witness countless shows at the Showcase, which at times would break out into bloodbaths. It was punks on punks, cops on punks. “There was always a threat of violence from skinheads, tweakers, gangs, or the cops there.” At twenty-one, Charlotte had seen enough and ditched Southern California for the more insular Pacific Northwest, picking Portland’s grayed out radius as a welcome landing spot. “Ten years ago, it was cheap and a good place to strike out on your own,” she notes. By the time she met guitarist Victor Franco and drummer Ben Dahmes, the nucleus of Roselit Bone was born.

Fast forward seven years and two full length records later, Roselit Bone entered Supernatural Sound (Oregon City, OR) to begin tracking Crisis Actor. Charlotte would oversee the majority of the writing and production. The sessions were long, but after only a few days, the seven piece band had recorded the bulk of the record live. It was a valiant effort to capture the manic energy of their live set which previous records had yet to fully realize. Yet by the time Noah Georgeson (Devendra Banhart, Joanna Newsom) was tapped to mix the album, Charlotte was immersed in something even more profound – the beginning of her gender transition. “There are echoes of what was to come in the lyrics of this record. I spent hours tracking the vocals on the title track, getting deeper with each take into the headspace of the toxic, angry, sexually confused person I inhabit on that song. At the end of it I was totally drained and felt an amplification of the anxiety that I came to recognize as gender dysphoria.” And with such a revelation, there follows a sense of distraction that can accompany it, one that Charlotte is quick to point out. “I don’t think people should see this album much through the lens of my transition, as it was written before I knew what was going on.”

Beyond Crisis Actor’s self deprecation and societal condemnation, there’s a sweeter side that lies just beneath a half-cocked smirk. When singing, “I hate myself and I’m at war with the world around me” on “I Pissed The Bed,” the tension between honesty and illusion is forthcoming, and ultimately points out the beauty and ugliness that Charlotte aims to document. “Sometimes I’m speaking from the most despicable part of myself, sometimes I’m trying to find common cause with people who would want me dead, sometimes I’m just telling funny stories from tour,” she freely admits. While “Proving Grounds” sends an anthemic howl across the bombed out desert with “I was glad to have been sterilized / but now I’m pissing blood,” “Laughlin, NV” blares with a tweaked out country swing that only a group of fearless misfits could attain, capsized by “Every hand’s a winner / until we’re coming down / On the Colorado River / slow dancing in the loser’s lounge.” It’s like a pair of forgotten moments from Bukowski’s Ham on Rye. In fact, it was Bukowski who once wrote, “The free soul is rare, but you know when you see it – basically because you feel good, very good, when you are near or with them.” If there is anything that encapsulates Roselit Bone, it must be this.

Crisis Actor’s arrangements are vast and ambitious, revealing a sonic, panoramic landscape where street urchins, psychedelic vaqueros, and drunken outlaws ride painted horses through a savage, dystopian, yet ultimately hopeful, punk rock future. It’s a record of layers, revealing itself more fully with each listen. Charlotte admits, “there’s a little bit of myself in every character,” and it’s precisely those characters that bring to life the record’s vision of a broken society straight from the American underbelly, one that the sprawling seven piece outfit so vividly mimics on stage. But in the end, it’s hard not to believe that this record lies somewhere within Charlotte herself, an artist on the cusp of rebirth, one that can only be described as beautifully as “fucked.”

Shea Roberts was born in San Francisco CA. His love for music and production is undeniable. He has been recording & producing records for well over a decade and playing music most of his life. Probably most known for being the front man of "The Richmond Sluts" a garage rock band formed in 97. This is the start of his solo career, to introduce his songs of a different style.