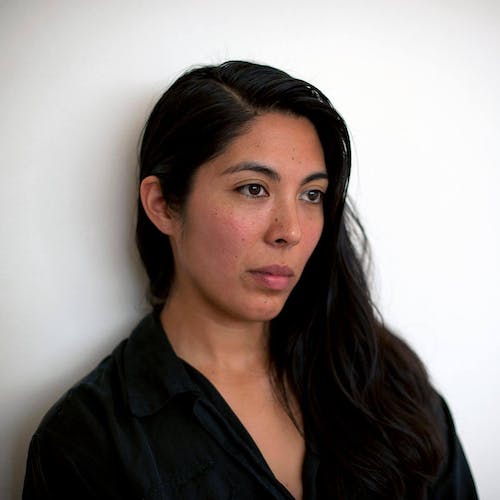 Frustrated by academia and emotionally raw from a breakup, Faustina Masigat stepped away from her peers in her mid-twenties. She had come to realize that her personal and artistic maturation had been stifled by her relationships and her overly angular traditional musical schooling. She knew she needed to spend more time alone, committed to a process of unlearning, before she could move forward. As she peeled back the rigid layers of her youth, she began to write the songs that, a few years later, would make up her debut record. Seeking honesty over perfection, her approach to composition became much more intuitive; seated in the natural expression of not only her emotional life, but also that of a spiritual life, an expression of her own femininity, and a means of self-improvement through self-reflection. She became obsessed with the old, forgotten, second-hand guitars she would find in the “As Is” section of local music shops, believing that magic and songs still lived in the beat-up wood. One album track, “Willie Nelson”, manifested, fully formed, from one of these guitars - an ancient, labeless individual that she called “Red”.

The songwriting on her self-titled debut is all at once heartbreaking, intelligent, meditative and elegant - centered around a voice that is difficult to attach genre to. There is a quiet intensity running through the world that Faustina creates: sweet and heavy, a touch of angst, brutally honest, smoldering. The album is understated, arranged as to allow Faustina’s effortless rapport with pedal steel player Tucker Jackson (The Minus 5, The Delines) to shine clearest. It’s a spacious and lush debut, with all of her vulnerabilities laid bare in songs hemmed together with fragile intimacy.

'Faustina Masigat' is out now on Mama Bird Recording Co. It was recorded by Ryan Lewis, mixed by Ben Nugent and mastered by Timothy Stollenwerk, all in Portland, Oregon.

A darkwave angel with a bouquet of peacock feathers in her hand, Gillian sets gloomy days to electric guitars.

Half Shadow is the ever-evolving songwriting and performance project of Portland’s Jesse Carsten. Inspired by the intimate, DIY ethos of songwriters like Diane Cluck and Mount Eerie, Carsten began releasing CD-R’s and homemade tapes of his music as Half Shadow in 2013. Incorporating spoken word, dream recitation, q & a sessions as well as other performative aspects to his shows, Carsten became known as an enigmatic and moving local performer. The Portland Mercury has called Half Shadow’s shows, “invariably powerful, full of wonder, and unlike anything else.” Yet Half Shadow’s songs remain humble – a blend of bluesy minimalism and poetic dream storytelling. Key to Carsten’s approach to song are the mythic, the unexpected, and the psychic – creating space for the unconscious aspects of life to appear and alter consciousness. Listeners are ushered into a world of earthy mysticism, synchronicities, heartfelt trips down ferny paths of mind, and percolating Piscean visions. Having been compared to artists as sonically diverse as Karl Blau, Brigitte Fontaine, The Dead Science’s Sam Mikens, Jonathan Richman, and Portland’s own Marisa Anderson, Half Shadow’s songs range in scope: from abstract finger-picked poems to heart-tugging acapella treaties and repetitive art-rock incantations. Carsten aims to reach audiences and inspire listeners while embracing experimentalism, creating music that transcends and transforms the ordinary.

Half Shadow’s first EP “5 New Songs of Light” was released by way of Portland’s legendary tape label Eggy Records in 2013. Containing several of Carsten’s best-loved songs, “Safety” and “Spectral Flower Meditation” the EP quickly traveled, finding fans internationally. A string of tours followed, sharing bills with Porches, Frankie Cosmos, Mega Bog, Black Belt Eagle Scout, the Ghost Ease and others, after which Carsten’s first full-length LP “Wind Water Passion Daughter” was released in 2015. Carsten returned in 2019 with Half Shadow’s strongest album to date: “Dream Weather Its Electric Song” released via their own Illusion Florist imprint. An incantatory record of midnight blue folk songs, alchemical rock and roll, and oceanic spoken word, “Dream Weather” resonates as a dream swelling into daylight vision, wrapping listeners in dark, sparkling hues and mossy undergrowth. The record has been called, by Antiquated Future, “a carefully thought-out work (dare we say masterpiece?) of poetic devotionals to the natural world, the subconscious, other realms,” and Tome to the Weather Machine has remarked that “it is refreshing to hear this concentrated thoughtfulness and tenderness in a stark folk package.” For Queen City Sounds, “Dream Weather” deconstructs “familiar songwriting styles, bringing the logical mind into alternate pathways of operating,” while Slow Breathing Circuit has championed the record as a poetic exploration, submitting that "Dream Weather" feels “as much like poetry as it does music, with the lyrics taking center stage.” Already in process on the third Half Shadow LP slated for a late 2020 release, Carsten intends to spread Half Shadow’s transformative music indefinitely, in this cosmos and beyond.