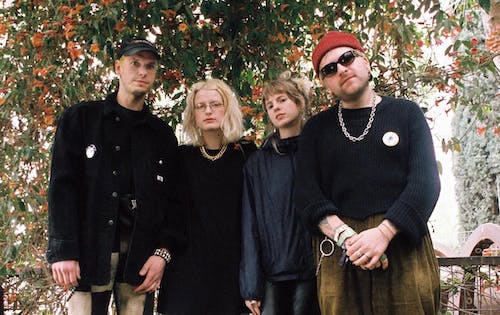 Empath goes far beyond the sound of birds faintly chirping. They’re a band that writes songs like communing with nature, bringing all their fuzzed and tripped out idiosyncrasies into harmony. Empath began in 2016 when Garrett Koloski, Em Shanahan, and Catherine Elicson moved into a house in West Philadelphia together, with Randall Coon joining shortly after. Even with the simple vision to shred, there’s a natural sensitivity in the way Empath communicates. Between the contrast of Elicson’s lush, almost delicate vocals, Koloski’s boisterous drumming, and the half-harmonious wash of guitar and Shanahan and Coon’s synths, Empath equips us with a healthy dose of emotional repose.

Wet fruit is a band consisting of Papi Fimbres, Charlie Salas-Humara, Rebecca Rassmussen, and Elaina Tardiff that uses polyrhythms and guitar phasing as a spiritual sonic assault not unlike the New York loft scene and early no wave. Guitar, drums, bass and vocals tangle into one, creating harmonious meditations, pushing and pulling an aural narrative into ecstatic revelations.