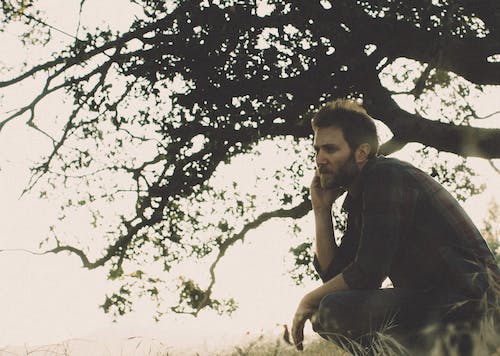 Eddie Berman takes listeners on a pilgrimage by way of his third full-length album, Frontiers, out September 20, 2019.

The critically acclaimed troubadour surveys himself and the world around him over the course of 11 heartfelt vignettes rooted in his signature fingerpicking style, accompanied by ethereal lap steel, bellowing double bass, and orchestral percussion. The album, in all its warm yet vibrant production, is inspired by nature, literature, and, of course, the joys and struggles of Berman’s own life.

“The late Irish poet and author John O’ Donohue had this fantastic notion about how there are three key things you absolutely need to have any kind of balance in this damn world: silence, stillness, and solitude. We’re obviously living in a time that’s utterly devoid of any of those three things.” Berman, who just welcomed his second daughter this year, adds, “As much as parenting is this unbelievable well of joy and wonder, it also just quadruples that cacophony. You’re always dealing with the beginnings or the aftermath of chaos. I knew that if I couldn’t find a way to make space for that silence, stillness, and solitude in my life, I’d be a much worse father, husband, and songwriter for it.”

The artist’s own musical journey continues to zigzag through uncharted territory. In 2014, Eddie made his debut with the EP Blood & Rust, featuring his duet of “Dancing in the Dark” with British folk icon Laura Marling. The adored Springsteen cover received praise from Spin, NME, Consequence of Sound, Uncut and more. In the aftermath, Berman’s profile grew on international tours and with the release of his first LP Polyhymnia. He signed to Nettwerk Music Group in 2017 and released his sophomore album Before The Bridge, which saw him reach new milestones – generating tens of millions of streams with prime real estate on coveted Spotify playlists like Your Favorite Coffeehouse, Acoustic Covers, and The Pulse of Americana, and spurring tours with Laura Marling, Tyler Childers, Passenger, Lee Ann Womack, and William Fitzsimmons.

In the midst of all this, Berman and his family relocated to Portland, OR. As he settled into life in his new city, he began making a daily pilgrimage to nearby Forest Park, one of the largest urban forests in the US. He made it a ritual to go on a six mile hike each morning, during which he immersed himself in the books and lectures of great philosophers like O’ Donohue, Rainer Maria Rilke, Thich Nhat Hanh. “I’d hike the immensely beautiful three miles to the top of the trail listening to these incredible thinkers, and then hike back down in silence, unpacking what I’d heard. The constant through lines of these works started seeping into me: the deep solace of nature, the necessity of solitude, and the importance of always trying to see yourself on the threshold to new frontiers. This album came from that strange dualistic aspect of those hikes: one part of me was just trying to quiet my mind as I walked in the woods, and the other part of me was trying to, you know, dissect the infinite nature of the universe -- and myself.”

After composing a new arsenal of songs, Eddie re-teamed with his band: Gabe Feenberg, Gabe Davis, Sarah Pigion and Matt Mayhall, along with their longtime collaborator, engineer and mixer Pierre De Reeder [Jenny Lewis, M. Ward]. They recorded the entire album in three days at Pierre’s studio King Size North in Highland Park, CA. Together they opened up the sonic palette, incorporating a larger sound with more percussion, bolder instrumentation -- a wider scope.

The first single and opening track “The Match” blends bending fingerpicking and boisterous horns with a meditative beat soaked in droning harmonium, as Berman’s voice quakes: I could’ve been an artist and I could’ve been a saint/Instead I’m gonna be the match and I’m gonna its flame. “’The Match’ feels like the genesis of the album,” he admits. “It’s about that first impulse to turn away from the chaos of the world, and to try to look for that resonance and rhythm within yourself.”

Meanwhile, the follow-up “Pascal’s Triangle” sees Eddie’s heartfelt delivery resound through deliberate strumming and a choral harmony. The song evokes the life-altering experience of seeing his first child for the first time after his wife’s tumultuous delivery. The track proves passionate and powerful.

On “The Canyon,” shining lap steel and driving percussion fortify Berman’s exploration of how familiarity makes the closest things to us habitual, even invisible.

And on “Rises and Sets,” trumpets and trombones buoy the contemplative fingerpicked guitar as Berman rasps about the tenuous fruits of all this labor. This track gets to the heart of Frontiers, echoing a quote by the English poet Kathleen Raine: “Strangest of all is the ease with which the vision is lost, consciousness contracts, we forget over and over again, until recollection is stirred by some icon of that beauty. Then we remember and wonder why we ever forgot."

“You have these moments where you feel present and balanced in the world, and then good god, it all slips away so fast. Getting back seems impossible. The songs on Frontiers are like breadcrumbs to myself, and hopefully to others, to help find a way back there.”

Berman’s latest offering is a beautiful, dense, and rewarding trip up the mountain and back.

Frustrated by academia and emotionally raw from a breakup, Faustina Masigat stepped away from her peers in her mid-twenties. She had come to realize that her personal and artistic maturation had been stifled by her relationships and her overly angular traditional musical schooling. She knew she needed to spend more time alone, committed to a process of unlearning, before she could move forward. As she peeled back the rigid layers of her youth, she began to write the songs that, a few years later, would make up her debut record. Seeking honesty over perfection, her approach to composition became much more intuitive; seated in the natural expression of not only her emotional life, but also that of a spiritual life, an expression of her own femininity, and a means of self improvement through self reflection. She became obsessed with the old, forgotten, second-hand guitars she would find in the “As Is” section of local music shops, believing that magic and songs still lived in the beat-up wood. One album track, “Willie Nelson”, manifested, fully formed, from one of these guitars - an ancient, labeless individual that she called “Red”.

The songwriting on her self-titled debut is all at once heartbreaking, intelligent, meditative and elegant - centered around a voice that is difficult to attach genre to. There is a quiet intensity running through the world that Faustina creates: sweet and heavy, a touch of angst, brutally honest, smoldering. The album is understated, arranged as to allow Faustina’s effortless rapport with pedal steel player Tucker Jackson (The Minus 5, The Delines) to shine clearest. It’s a spacious and lush debut, with all of her vulnerabilities laid bare in songs hemmed together with fragile intimacy.

Faustina Masigat is out now on Mama Bird Recording Co. It was recorded by Rian Lewis, mixed by Ben Nugent and mastered by Timothy Stollenwerk, all in Portland, Oregon.