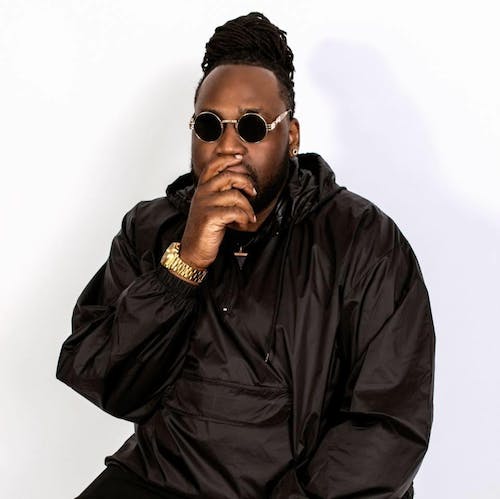 Willamette Week G!G Presents a showcase of the finest in PDX hip-hop

Brown Calculus explores the soundscapes of the post-soul movement. Keyboardist and beat maker, Andre Burgos, and singer/songwriter, Vaughn Kimmons, are Geminis, illuminating the sacredness of Black music, seeking to bring about community on Earth and beyond. They reveal the connection between complicated time signatures and Black divinity, with a cosmic sound that remains grounded. Sharing the same body in their past lives, they perform with melanated synergy.

Rasheed Jamal Washington, is an American rapper, songwriter, and actor better known by his stage name — Rasheed Jamal. Many of his projects, albums, and singles including My Beautiful Ugly (2012) and SANKOFA (2015) have received vast critical acclaim. Following the release of SANKOFA, Rasheed was nominated for Best New Band in the Willamette Week. On August 21st, 2018, during the Solar Eclipse, he released his most recent work INDIGO CHILD (U Ain’t The Only 1!). He founded an artistic collective known as FRSH TRB Republic. The creative collaboration formed with the help of Glenn Waco and Mic Capes, who together are known as The Resistance.

Growing up in Hot Springs, Arkansas, Rasheed was immersed in music — drawing inspiration from the jazz, gospel, and blues festivals his family brought him to as well as the harsh realities of street life. In an effort to continuously celebrate the heritage of hip-hop, Rasheed samples rhymes, song titles, or album titles of the various rappers he studied. Best known for his dextrous and dense word play, Rasheed has a gift for entertaining while conveying a sense of intellectual dialogue on bouncy and bass driven music. Within his work, Rasheed’s strives to connect the dots of his surrounding culture.

His forthcoming offering entitled, 22 Grams (iAMTHATiAM), testifies to the experience of a young black male in modern day America, given from the perspective of a disembodied “Soul” — the main protagonist in the narrative. Several years in the making, 22 Grams is a statement that will mean a lot to the culture of rap music.

For inspiration Rasheed looks to a wide variety of artists, however, identifies these three as the most prominent: "Tupac Shakur has been the most inspirational to me emotionally, Outkast has been the most inspirational creatively, and Lupe Fiasco's Food & Liquor gave me the confidence to find my own voice and to stop hiding my intelligence — not only on my records, but in my day to day life.” Listeners may draw style comparisons to Tupac Shakur, Andre 3000, Q. Tip, Kendrick Lamar, and Big KRIT.