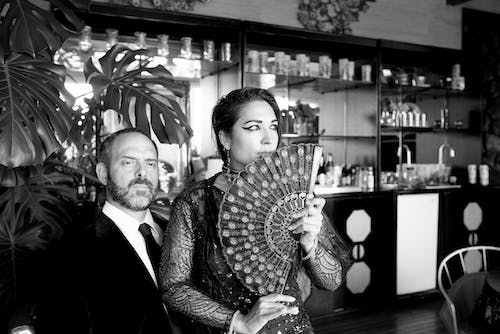 This party marks the 19th anniversary of Anjali and The Kid playing in Portland clubs as a duo since their New Year's Eve debut in 2000.

"DJ Anjali & The Kid have been a staple of Portland, Oregon’s club scene for almost two decades, creating spaces for DJs and dancers to enjoy an international mélange of music ranging from bhangra to reggaeton."

Few DJs can be said to have changed the sound of their city but that is exactly what DJ Anjali and The Incredible Kid have accomplished since they first introduced Portland, Oregon nightclub audiences to the many varied sounds of Global Bass at a raucous New Year’s Eve debut in 2000. They are most known for incinerating dance floors with the heavy dance floor artillery of South Asia, but the duo scour the globe for any hard-hitting music that combines local music traditions with window-rattling production.

After making a name for themselves in their hometown’s raucous house party circuit, DJ Anjali & The Incredible Kid introduced the Portland, Oregon nightclub scene to the sounds of Bhangra, Bollywood and Global Bass on New Year’s Eve 2000. A series of residencies followed, beginning with a night at the legendary Blackbird, and the duo began hosting their ANDAZ dance parties in July of 2002. The party’s focus on hardcore Panjabi Bhangra and the latest electronic confections from the Bollywood film industry continue to pack the dance floor after 16 years. While ANDAZ was still in the bloom of youth, Anjali and The Kid founded the revolutionary dance night ATLAS (with co-host/DJ E3) at Holocene in November of 2003 to introduce Portland to Global Bass sounds such as: Balkan Beats, Reggaeton, Funk Carioca, 3Ball Guarachero, Digital Cumbia, Urban Desi, French and Arabic Hip-Hop, Rai N B, Reggada, Dembow, Dubstep, Kuduro, Merengue Urbano and a host of other local and diasporic future musics. ATLAS was a vital party in Portland nightlife and the Global Bass scene internationally for more than nine years. In 2013 Anjali and The Kid initiated TROPITAAL: A Desi Latino Soundclash, their latest project.

“After 18 years as a duo, DJ Anjali & the Incredible Kid are a Portland institution. It’s difficult to think of a local dance night with a more lovingly crafted mix of Bollywood, urban desi and Indian dance pop.” Willamette Week 9/19/18

“The West Coast’s king and queen of bhangra/global bass/Bollywood dance parties, DJ Anjali and the Incredible Kid.” -The Portland Mercury 8/17/16

“For more than 15 years, DJ Anjali and the Incredible Kid have been an inimitable force in the Portland dance scene.” -The Portland Mercury 6/22/16

“DJ Anjali & the Incredible Kid have been Portland’s leading world music DJs since the turn of the millennium.” -Willamette Week 12/31/14

“Known for bringing cutting-edge music to virgin ears, they are guaranteed to throw you a good time” -Eleven PDX Magazine December 2013

“Maybe the Portland area’s most well-known deejays.” The Portland Tribune 1/26/12

“People were talking about all weekend: DJ Anjali & The Incredible Kid–playing every, SINGLE day (the only performers to do so), the Portland duo was the must-not-miss Bollywood/bhangra dance party makers of the weekend.” (Sasquatch! Festival 2011) Oregon Music News 5/31/11

“Celebrate our local heroes as they hold down the biggest rock fest in the Northwest” (Sasquatch! Festival 2011) The Portland Mercury 5/26/11

“The pair have been keeping Portland dancing for so long in various incarnations, imagining the local music scene without their bhangra and Bollywood rhythms is unthinkable. ” The Oregonian 5/26/06

The 2006 OPB Art Beat episode on ANDAZ has recently been made available again: www.opb.org/television/programs/artbeat/segment/dj-anjali-and-the-incredible-kid/

The Portland Tribune featured a story on the 15th-anniversary of ANDAZ: www.news.pamplinmedia.com/pt/11-features/366852-247638-hooray-for-bollywood-dance-party-turns-15

ANDAZ was featured in a 7-page spread in the May 2017 issue of GQ India: www.gqindia.com/content/the-amazing-story-of-how-desi-parties-are-keeping-portland-weird

Seattle based musician Adam McCollom started playing the dhol while living in India in 2003. He's been the resident dholi at ANDAZ for over a year, hitting the road with Anjali & The Kid to play festivals, concerts-in-the-park & shaadis. His list of former bands is impressive: Degenerate Art Ensemble (guitar/composer), The Vells (bass), The Pica Beats (keyboards/ piano), Breaks & Swells (bass), Brent Arnold and The Spheres (keyboards/piano), Ghosts Ive met (bass), Ota Prota (guitar/composer), Motherland Ensemble (oud). Since his graduation from Cornish (BFA in Music) where studied Jazz with Julian Priester (of Sun Ra Arkestra) and Hadley Caliman, he has studied Khayal (North Indian classical singing) with Pandit Devashish Dey in Varanasi for a full year as well as the Egyptian Oud & the Arabic Maqam system with Egyptian ethnomusicologist Maurice Roman.