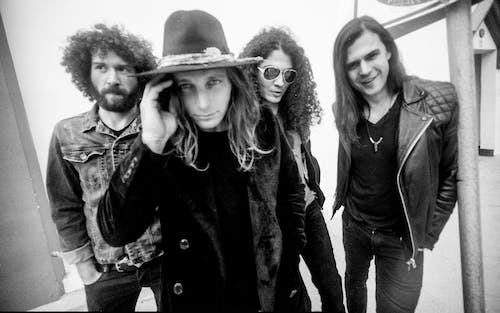 Dirty Honey Meet & Greet check in will take place approximately between 3:30pm-4:15pm. VIP times are subject to change. The most up to date full VIP details will be sent to you 3-5 days prior to the show date. For customer service please email info@future-beat.com

Dirty Honey is set to perform at more than a dozen festivals this summer including Sonic Temple, Welcome To Rockville, Rocklahoma, Louder Than Life, Exit 111 Festival, Heavy MTL, and Epicenter among others. With support slots for The Who, Guns N Roses and a return invitation to join Slash on tour this summer, expect Dirty Honey’s talent and relentless drive to earn them a key role in defining today’s rock movement.

Fuck fooling about. From the moment it swaggers from the blocks with its menacing, lead single Mother, Future Dust barely pauses for breath. The Amazons’ sublime second album is as explosive as expected from the Reading rockers whose eponymous debut stormed the Top 10 less than two years ago, but it is also packed with sinister surprises no one saw coming.

Ten monster songs make up Future Dust, an album that retools rock’s dark past for the present day while having an absolute blast. Loose blues grooves, religious references and falsetto backing vocals abound on songs that explore issues including social media witch hunts, eating disorders and depression, but never lose sight of a singalong.

“We were searching for a heavier sound and we found it by delving back through the blues,” says singer Matt Thomson. “From Led Zeppelin, we discovered Howlin’ Wolf and immersed ourselves in his back catalogue. I read Hellfire, the Jerry Lee Lewis biography, and fell in love with the Biblical language that was used to describe his ‘devil music’.

“As much as the songs, it was the stories and characters that we loved. Playing boogie-woogie piano in murky clubs sounds pretty tame now, but back then, it was raw and dangerous. We wanted to capture that with a dirtier, grittier, sexier sound.”

“Our influences had already started to shift when we released our debut,” says Joe. “The final songs we recorded, Black Magic and In My Mind, were much heavier than our early singles. And on stage, those were the songs we most enjoyed performing.

“We realised we’re a rock’n’roll band,” shrugs Matt. “It might not be cool or make us millions, but it’s what works for the four of us.”

So swift was The Amazons’ ascent that they scarcely had time to decide on a sound before breaking though. Formed in 2014, by the following year they were signed and receiving rave reviews for their ferocious live shows. Their debut was recorded in West London months before they were tipped everywhere from Apple Music, Amazon, Kerrang and Q, shortlisted on the BBC’s Sound Of poll and playlisted by Radio X and Radio 1. On its release in May 2017, The Amazons sailed to No.8 in the UK album chart.

Touring took the band all over the world until last spring, when they returned to Reading and panicked. With a studio booked for October, they had written precisely no new songs and decided to distract themselves from the task in hand by working instead on a live EP, last summer’s acclaimed Come The Fire, Come The Evening. In fact, that distraction proved their salvation.

“We were kicking ourselves for leaving it so late,” says Matt, “but rather than write, we were listening to old Led Zep, Bob Dylan and Yardbirds live albums, pretending to be busy on the EP. We loved how raw those recordings sounded and that’s what led us back to the blues.”

It also inspired Matt to start trawling through his old notebooks, where he found the riff from which Mother sprang.

“That riff is probably four years old, but it didn’t suit the songs we were writing at the time,” says Matt. “In revisiting it, it struck home how much we’d changed as a band. Not only how much better we’ve become as musicians, but in how we now know what we want to say sonically and lyrically.”

‘Friends wanna kill me’ is Mother’s memorable opening line, arriving more than a minute in to a sexy beast of a song, a recent Annie Mac Hottest Record in the World.

“Mother started out as a song about seeking forgiveness, but ended up about defiance,” explains Matt. “Like most young people, I make mistakes that don’t tally with how I see myself, as essentially a good person. But with social media, you don’t get second chances. Straight away, it’s a witch hunt. If you want to judge me for my weaknesses, fuck you. Ultimately, the only person I have to answer to is my mother, who accepts me as I am.”

Mother and the gritty, drums-driven End Of Wonder, which addresses the silent rise in eating disorders, particularly among young people, proved the pathway in to the album, their contemporary themes wilfully at odds with their sonic inspiration – a song called Grinnin In Your Face by the delta bluesman Son House.

“The song is just him singing and clapping, but it’s so powerful,” says Joe. “Both of those songs began very bluesy and stripped down and the idea was to retain that intimacy as we built them up.

“End of Wonder started with New Orleans-style foot stomping and handclaps, which are still a prominent part of the song. The handclaps were a nightmare to get right in the mix.”

With the album underway and the sun beating down all summer, The Amazons decamped from their windowless rehearsal room on an industrial estate in Reading to a wooden cabin on a former hippy commune near Swansea.

“We had to take drastic action to meet our deadline,” says Matt. “Turning our phones off was key. Without our phones, we were far more focussed and creative. It was incredible how much happier we were without them.”

The four fell in to a routine of afternoons on the beach and exploring nearby caves – see Future Dust’s striking artwork – and evenings spent drinking whisky, playing cards and blaring classic Fleetwood Mac and the Stones on the stereo, before working through the night on the basic gear they’d brought with them. In two weeks, the rest of the album was written, including scorching second single Doubt It.

“Doubt It we wrote one night after listening to T. Rex,” says Joe. “It’s a fun one that really captures the spirit of the adventure we were on. That’s just us doing the falsetto backing vocals. There’s a lot more of all four of us singing on this album, almost on every track.”

Doubt It is about a romantic encounter, or as Matt more crudely puts it – “It’s about that moment when it’s either going to happen or it’s not, if you catch my drift,” he says. “It’s quite sparse and sinister, until the crazy backing vocals kick in. I can’t wait to hear the guys do them live.”

Having demoed Future Dust back in Reading, The Amazons returned to Wales for recording at Monnow Valley with their mate Catherine Marks, 2018’s Producer of the Year (Wolf Alice, The Wombats, PJ Harvey), who also made their debut.

During an eventful three weeks recording, Joe’s partner gave birth to twins back home and Chris lost the top of his left index finger chopping spring onions, forcing him to invent a new way to play his guitar parts. Oh, and there were fierce arguments, lots of them.

“All of us were stressed, particularly Joe as a new father, but mostly because we are so passionate about this album,” says Matt. “Our souls are in these songs. Plus Catherine pushed us hard. With our debut, she was very much ‘Just do it, get it out there’. This one meant so much more.”

As ever, the lyrics were left to last, although themes had formed at The Amazons’ beach-side retreat, notably the toll that our ever-connected age is taking on mental health.

“Being on your phone all the time makes you feel shit,” says Matt. “We’re not a political band and I’ve never felt the need to write about wider issues, but this is personal to me. A lot of my relationships are conducted over the phone. I’m on social media. All of the lyrics spring from personal experiences, but they chip in to the wider world.”

The boisterous Dark Visions deals with depression, the bluesy Warning Sign is a plea to a friend on a path to self-destruction and the glorious, grinding Fuzzy Tree is about blurting something out to a partner and not being able to take it back.

“There aren’t a lot of love songs,” says Matt. “Most are about fucking up. Or confusion. 25 I wrote two months before I turned 25, to try to work out where I am in life. The song mimics the confusion that I constantly feel, that everyone my age feels. Are we all narcissists or are we really switched on?”

25 appears twice on Future Dust, in vastly different form. The frantic first version boasts drums inspired by Iggy Pop’s Lust For Life. The second, which opens with gorgeous pump organ recorded at Monnow valley on the band’s final night in the studio, beautifully strips the song down and changes the lyrics to make them more optimistic.

The majestic, arms-aloft All Over Town deals with modern-day dating.

“It’s destructive,” says Matt. “I go on dates and find everyone, including myself, looking for the next best thing. When my parents met, they weren’t being bombarded by the world’s most beautiful people on their phones every day. Why can’t we see what’s in front of us? The answer is here, not elsewhere.

“I’m not offering solutions. I don’t have them, but these are issues affecting me and my friends, which is why I wrote about them. The lesson we learnt making this album was to turn off our phones more often. Oh, and that it is possible to be shit at hand claps. Who knew?”