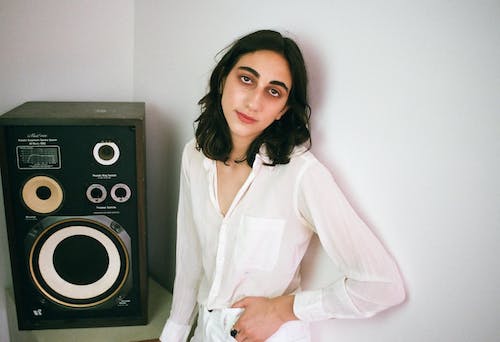 Holding fast to the emotional honesty of Playing House (2017), Brigitte Naggar's sophomore record as Common Holly, When I say to you Black Lightning, is a look outward; an exploration of the ways in which we all experience pain, fear and self-delusion, and how we can learn to confront those feelings with boldness. When I say to you Black Lightning feels like Naggar's conversation with herself, meticulously penned to work through challenges as they unfold. It's cool, and more than that, it feels important. It's about finding the seeds of strength to navigate adult life, and about the ways in which we all find ourselves in that place of struggle when life starts to show you its cards and you begin to understand, in the artist's words, "just how real shit can get."

Stereogum: "Nothing is a seriously stunning piece of work that ought to put Common Holly on your radar"

Paste: “Common Holly’s voice is so lovely, that it might just make you forget your woes for a few blinks”

Brooklyn Vegan: "Brigitte’s truly wonderful voice is what really separates her from the pack"

Brooklyn Vegan (Album Review): "... The beginning of something great"

CBC (First Listen): "Naggar has carefully composed an album of beautiful simplicity. It’s a collection of songs that mark a haunting, intimate debut."

Alt Citizen: "Even when the guitars gnash their teeth Naggar’s voice sounds like it’s drifting on a cloud. I can’t wait to hear where she floats to next"

Indie Shuffle on 'If After All': "A cathartic moment of poetry that's straight out of the Paranoid Android playbook,".

Indie Shuffle on Nothing: "... delicately yet brutally candid, which in turn makes it endearingly relatable"

DIY Magazine: "If there’s one word that couldn’t be used to describe Montreal-based Common Holly, aka Brigitte Naggar, it’s predictable"

Culture Collide: "Common Holly... takes on the coming of age tale with a compositional artistry way beyond her years"

Raw Meat: "Common Holly's sounds are immediately unique, drawing us into a world of her own creation"

Gold Flake Paint: "Magical and mercurial and then decisively sincere"

Melodicism and classical stylings converge in the brooding soundscapes of Portland’s experimental pop trio Sheers. Sheers returns with An Occasion, a new EP featuring concert harp and a yet unheard lushness in the band’s repertoire. Frontwoman and primary songwriter Lily Breshears grips tight the reins of her voice, bending the edges of melody to wrap beauty in a veil of unease. Breshears combines turn of millennium R&B with elements of French impressionism, an interplay of tension, texture and groove. Since jazz drummer Daniel Rossi and multi-instrumentalist Aaron Stern joined the project, Sheers has found a

sound near triphop, but as Willamette Week writes, “it’s a real treat to hear a band that’s almost a genre unto themselves.”