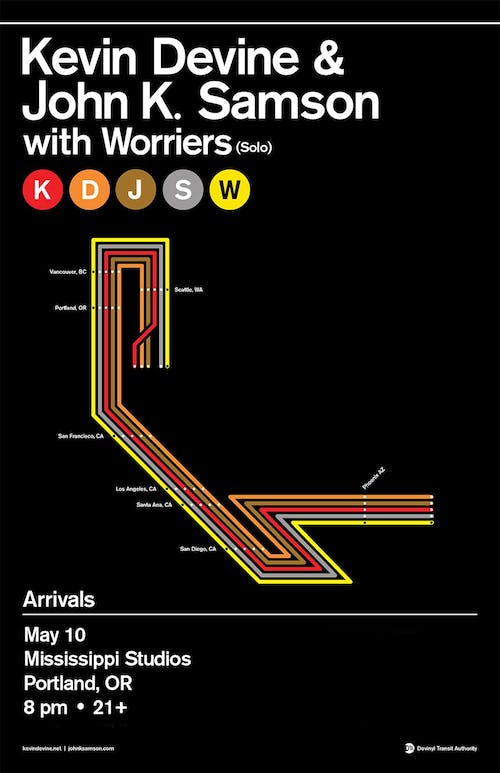 A double-header of inventive rock songwriters from Brooklyn and Canada

Singer/songwriter Kevin Devine rose through New York's indie rock and emo circles in the early years of the millennium, first as the frontman for emo band Miracle of 86, and later as a solo act. Thanks to albums like 2003's Make the Clocks Move and 2005's Split the Country, Split the Street, his introspective and emotionally urgent songs about love, life, and politics won a loyal fan base that followed him through a brief stint as a major-label act. Following his 2009 standout Brother's Blood, Devine collaborated with members of Manchester Orchestra as Bad Books, a project which went on to release three albums over the next decade. He continued releasing solo albums throughout the early 2010s and in 2015 began a split-single series called Devinyl Splits which over the next four years saw him working with artists like David Bazan, Cymbals Eat Guitars, and Jesse Lacey. He also released another solo full-length in 2016's Instigator.

John K. Samson is a talk-singing sober leftist vegetarian Quaker from Winnipeg, Treaty One Territory, where he lives with his partner and fellow songwriter, Christine Fellows, and helps run a curling league and a chapter of Book Clubs for Inmates. Since 1997, John has written four full-length albums for his band, The Weakerthans, and two solo records, Provincial (2012), and Winter Wheat (2016). John is currently playing solo shows, where he performs selections from all 6 of these releases (available on Epitaph/ANTI Records), along with new material.

Worriers are a melodic punk band from Brooklyn, New York. The band’s music is centered around the songwriting of Lauren Denitzio, with the help of friends Mikey Erg, Nick Psillas, and Frank Piegaro, among others. They released their second LP "Survival Pop" with SideOneDummy Records in 2017 and have previously released records with Don Giovanni, No Idea and Yo-Yo Records. Worriers has toured with Against Me!, John K Samson & The Winter Wheat, Anti Flag, Julien Baker, The Wonder Years, Camp Cope, and more. Described as "a masterfully crafted punk record" by the Village Voice, Worriers' first full-length "Imaginary Life" was produced by Laura Jane Grace of Against Me! and was released on Don Giovanni Records in 2015.