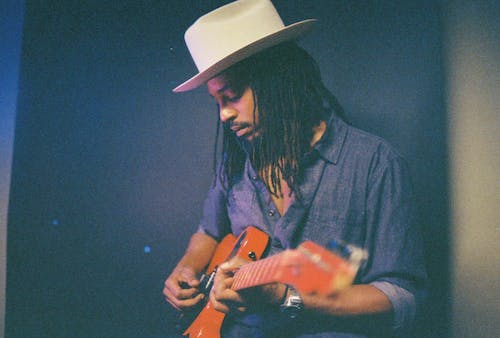 Austin outfit celebrating 10 years of 'Tell 'Em What Your Name Is!'

Black Joe Lewis and the Honeybears at Polaris Hall

Black Joe Lewis and the Honeybears

Black Joe Lewis and the Honeybears are going to celebrate the 10th anniversary of their debut album "Tell Em What Your Name Is" (Lost Highway Records/ Universal Motown) on these upcoming fall shows.

The band will play the album in it's entirety plus other hits.

This album features some of Joe's biggest hits including "Gunpowder", "Sugarfoot' and many others.

Black Joe Lewis & the Honeybears return with their most subversive record to date: an exploration of the sordid trappings of ego; isolation, consumption, waste and war. Sonically inspired by the hill country blues of Junior Kimbrough, cowpunk style of The Gun Club, and the southern soul of Stax, the album charts new territory with a heavy stream of lyrical consciousness. This is The Difference Between Me & You. Recorded in their hometown of Austin, Texas, with Grammy award winning producer Stuart Sikes (The White Stripes, Cat Power, Modest Mouse) this familiar environment provided a “hands-on style of production with, open, creative interaction between the entire band [for the first time]” Lewis said.

The band’s fifth studio album works to explore the human condition through an impassioned and introspective lens. Mining his first decade of experience on the road, The Difference​ is influenced by a deep repertoire of sounds: the heavy grooves of Albert King, punked-up blues of R.L. Burnside, the storytelling of Bobby “Blue” Bland, and the soulfully layered horns of the Stones, are all omnipresent throughout.

A Texas native, Lewis discovered his love for the blues & guitar work from an early age. “I grew up on hip-hop and whatever my dad was listening to—Springsteen, Curtis Mayfield, Donny Hathaway and the like—but once I picked up the guitar I started getting into the deep cuts. My early days of crate digging helped shape the band’s experimental style,” he recalls. “It wasn’t even until my late teens that I first picked up a guitar, after getting a job at a pawn shop. I taught myself some chords on lunch breaks.”

With The Difference​, “I wanted to make a more complex and reflective record than I ever have before,” Lewis explains. On opening track “Nothing but a Cliché”, he carps about an old acquaintance whose interests were best suited only for themselves. Similar themes of derision are included on tracks “No Rhyme or Reason” and “Culture Vulture”, expanding on the vices & followers within society. But just as quickly as Joe systematically ridicules the world around him, the album turns inward. “Face In The Scene” reveals the story of an existential scenester addicted to the limelight. Both mature and adventurous, balancing between a 4/4 & 6/8, the song carries a booming groove. “Suit or Soul” brings forth a thoughtful ballad about the type people you surround yourself and what their true intentions are. On The Difference Between Me & You​, Black Joe Lewis & the Honeybears traverse a lifetime of physical and metaphysical experiences, characterized by looking in the mirror and asking yourself the tough questions. Lewis ultimately succeeds in pulling off a rare feat: creating

an informed “real blues” record.Recorded at Big Orange studios in the band's hometown of Austin, TX, Backlash finds Black Joe Lewis joining forces with Grammy Award-winning producer Stuart Sikes (The White Stripes, Cat Power, Modest Mouse) and revisiting his most deep-seated influences. "I wanted to go for more of a soul/blues/rock-and-roll sound compared to the last one-the kind of stuff I was doing back in the day, but with the songwriting a little more evolved," Lewis says. The band's most stylistically adventurous work so far, Backlash expands their sound by bringing gritty guitar tones and Stax-styled horn sections to intricate, danceable arrangements inspired by the likes of Nile Rodgers.

Kaleidoscopic in mood and unrestrained in emotion, Backlash channels its restless energy into tracks like the infinitely catchy and groove-drenched "Sexual Tension," the fed-up and fired-up "PTP," and the fantastically unhinged "Freakin' Out." On "Lips of a Loser," meanwhile, Black Joe Lewis lays down a beautifully devastating breakup ballad powered by sprawling guitar lines and cinematic swells of strings. "'Lips of a Loser' is my Isaac Hayes impersonation," notes Lewis of his smoldering vocal performance on the album's stunning centerpiece.

Elsewhere on Backlash, Black Joe Lewis addresses unrest on a broader scale: "Global" infuses howling vocals and heavy guitar riffs into a rowdy meditation on environmental destruction, while the chant-driven "Nature's Natural" emerges as the album's most striking and mournful moment. "That one's about black-on-black crime, and also about police killing black dudes all the time," says Lewis of the latter, pointing out that the song was written in the aftermath of Ferguson.

A Texas native, Lewis discovered his love for the blues soon after learning to play guitar his late teens. "I grew up on hip-hop and whatever my dad was listening to-Springsteen and Curtis Mayfield and Donny Hathaway-but once I picked up the guitar I started getting into the deep cuts," Lewis recalls. Naming Lightnin' Hopkins and Iggy Pop among his main inspirations, he formed Black Joe Lewis & the Honeybears in 2007 and released his major label debut Tell 'Em What Your Name Is! (Lost Highway/Universal) the following year.

Known for their can't-miss, full-throttle live show, Black Joe Lewis & the Honeybears are now gearing up for a 2017 North American headline tour, the band's first comprehensive run since 2013.

Isn’t it strange that most bios are written by the people they are about? While this is not lost on And And And, they can’t seem to present themselves flatteringly. They are screwed as a band because they suck at: bios, social media, money, and fashion. They continually shoot themselves in the feet and have been stumbling around the west coast for far longer than is appropriate at their age.