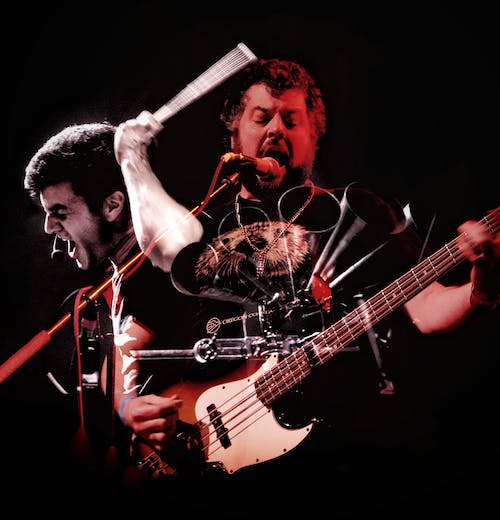 Bombastic high-energy rock from LA with epic 2019 LP, ‘The Beast You Are’

The Grizzled Mighty, Via Vale

Big Business is a band. They play heavy rock. On that, we can all agree. Things get tricky when you try to classify exactly where on the musical spectrum the dynamic duo’s racket falls. “I guess psychedelic heavy metal punk rock? I don’t know. People always say ‘sludge rock,’ which I always found to be lazy and kind of inaccurate," says drummer Coady Willis. "A lot of our songs are fast, and it’s not like we’re playing a half-assed Black Sabbath riff over and over again. That’s been the struggle of the band. We’re a band that doesn’t really fit into what everyone else is doing."

Willis comes from punk rockers The Murder City Devils. His co-conspirator, bassist/vocalist Jared Warren, spent time in noise rock weirdos Karp. Together, they formed Big Business in 2004. The LA-based outfit’s first three albums didn’t quite mesh with Hydra Head’s post-metal aesthetic, but their idiosyncrasies caught the attention of another iconoclastic outfit: The Melvins. They recorded three albums, an EP, and various songs between 2006 and 2016 with that iconic grunge/doom/experimental act, all while maintaining their own identity as Big Business. Along the way, they picked up guitarists Toshi Kasai and Scott Martin, but on 2016’s Command Your Weather, they returned to their core duo format. They remain in that lineup on their sixth full-length, The Beast You Are.

“It’s just better. We work faster, and we know what we’re both going for. It gives us more room to be weirder in certain aspects and try different things. It makes sense because that’s how we established ourselves in the beginning and how we learned to write songs together, it was just the two of us. Coming back to that lineup felt natural,” continues Willis. The two performed everything on the album, which was recorded between the early November and early December of 2018 at El Studio in San Francisco by Phil Becker (Pins of Light, Terry Gross). Willis, Warren, and Becker handled the mixing, with Carl Saff lending his mastering expertise to the final product. Once more, Warren has hacked up some construction paper for one of his unique cover art pieces.

With a new, dynamic demoing process leading to the creation of the most songs they’ve ever written for an album, The Beast You Are delivers 13 doses of uncategorizably heavy rock music. From the ominous death march of “The Moor You Know” to the soaring “Let Them Grind” to the delicate, ethereal “Under Everest,” Big Business continues to defy listener’s expectations. No matter the context of their music, however, one thing remains true: they are definitely still a band.

Welcome to the world of The Grizzled Mighty. An audio spatial concept not constricted by the limitations of fidelity, and expounds upon its quantitative capacity to the point of frenzy. A force greater than gravity, pulling you in past the event horizon to be swallowed down to the belly of compressed luminiferous aether. Inescapable and all encompassing, every electron will be sonically deconstructed only to reemerge whole again, but unsure of the existential paradox of consciousness and creation. Such as the particles of CERN, thrown together at the brink of cosmic terminal velocity, observers brace for impact and watch in awe for the creation of previously undiscovered fundamental auditory elements and dwell in the fear for what has been unlocked. The singularity of a new genesis at first exposure to the omnificent aural matrix. Embark on the next phase sonic quantization. Embrace, harness, and transform the potential of reverberation to kinetic auricular dissociation and back again in such perpetuity that outlasts the celestial bodies that created us all. There is no beginning. There is no end. There is no escaping The Grizzled Mighty.

The Portland Oregon band creates music of a dark, hooky, melodic flavor. Formed after Keeley Davis (At The Drive In, Sparta, Engine Down, Denali) transplanted to the Pacific Northwest in the summer of 2018 with a catalog of songs written over years of touring. Mutual friends in Portland introduced Keeley to John Sherman (Drummer for Red Fang) who immediately recommended his long time friend and talented band mate Jeremy Walsh to complete the power trio.