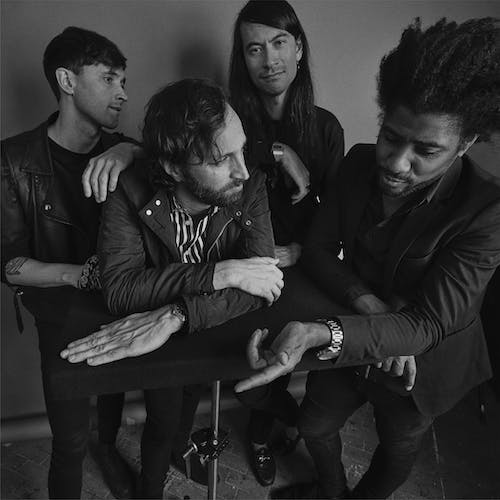 In the FBI file on the American rock ‘n’ roll band Algiers—which given their prior penchant for repping the Black Panthers, Malcolm X, Angela Davis, and Afeni Shakur, among others, surely exists—under the subheading for their third album, There is No Year, the intelligence should soon read: all prior analytics appear outdated… this undoes everything we thought we knew about their intentions…what hides inside them… as if they are mutating live on camera, between frames…

Indeed, even those aware of the ideals of this outspoken four-piece will find their latest direction traversing unprecedented ground. Coming off two years of nonstop world-touring for their critically acclaimed second album, The Underside of Power—including Central and Eastern Europe, the Baltic States and the Balkans, where they have established a rabid following; an extended stint opening for Depeche Mode in huge stadiums such as the 75,000-capacity Olympiastadion in Berlin; as well as Glastonbury 2019—There is No Year solidifies and expands upon the doom-laden soul of their foundation, toward an even more epic, genre-reformatting sound, one somehow suspended in the amber of “a different era,” as described by guitarist Lee Tesche.

From the instant synth-pulse of the opening seconds of There is No Year, it’s clear that Algiers have set out to stake new ground, internally as much as sonically. At the forefront of this evolution is the centrality of power housed in Algiers’ multi-instrumentalist lead vocalist, Franklin James Fisher, whose voice and words provide the backbone of the album, his lyrics sourced entirely from an epic poem, “Misophonia,” composed during his search for meaning amidst a protracted personal period of anxiety and lack.

“What I wanted to do is create a negative space wherein I can exist and engage but at the same time not be so exposed,” Fisher explains. He speaks of the record’s perspective as not only a political apparatus, but an intimate, responsive evocation of his understanding that “nothing is ever what you expect”, that what might seem for now to be well known or assured is not always so, that there is no safety net. The effect, as felt on the record, is undeniable: Fisher sounds like he is singing for his life—for all our lives, really—baring his soul while the walls disintegrate around us.

The pool that he draws on is at once penetrating and exhilarating, wielding its anguish like a mirror at Medusa, full of hell. Whether he is lilting over post-Lynchian synth-whorl like a spot-lit bandleader, as on “Unoccupied,” or reincarnating the spirit of thrumming 80s R&B into a proto-no wave dancefloor classic straight from 2046, as on “Chaka,” there is a tangible emotional electricity to Fisher’s delivery, a personal valence that makes you want, more than anything, to believe, even while not quite knowing where we’re headed.

No less next-level in Algiers’ conception is the ambition of the aural architecture they manage to summon. Under the direction of producers Randall Dunn [Sunn O))), Earth] and Ben Greenberg [Zs, Uniform (as featured on Twin Peaks season 3)], the same exciting duo who first teamed up on Jóhann Jóhannsson’s Mandy soundtrack in 2018, the clearly studied composition of this new horizon finds an outlet for turmoil via a fascinating synthesis of styles—from future doo-wop from the trapped heart of ATL, where they began; to industrial soundscapes a la Scott Walker or Iggy Pop; to something like the synthetic son of Marvin Gaye and Blonde Redhead. The whip-tight rhythm section of Ryan Mahan and Matt Tong (ex-Bloc Party) moves back and forth from infectious menace to sci-fi soundtrack to big band fever dream, seamlessly syncing fresh continuity. Mahan’s beat programming and synth constructions fill out the fibrous threshold, while Tesche’s sound-sleeves and aural-layering shapeshift into a richly polished means of exploration, revealing more and more the deeper you delve.

“This is the sowing / Of the whirlwind,” Fisher sings on “Repeating Night.” “Don’t forget it’s us against them.” There’s something more behind the curtain of our daily-headlined pain, the album’s title seems to suggest—something even larger at stake than rage, or even revolution; which is exactly what Algiers’ music appears to have resolved itself to channel, and to wield. Their essence on There is No Year is a statement of their defiance, their desire to feel and be human even beyond the necessary fight back, sprawling head-on into the burning wind of doubt and fear and all it’s claimed, arriving on the far side of calamity more alive than ever.

In the infancy of Zen Mother, Monika Khot and Adam Wolcott Smith were on a mission to make the most thunderous, expressive, organic, and transcendental music possible given the limited means of a duo. Culling from the dizzying scope of psychedelia, the dystopian collages of This Heat, and the conceptual aims ofavant-garde composer Igor Wakhévitch, their creative process was an intense ritual in channeling cabalistic ideas through exploration and experimentation. The early Zen Mother recordings traversed a variety of timbres and approaches—from swirling walls of hallucinatory distortion to pulsating drone pop to feverish krautrock-imbued meditations and everywhere in-between. And somehow they threaded a continuous aura of futurist Shamanism through it all.Through years of vagabond touring across North America and abetted by solo endeavors like Khot’s revered solo project Nordra, Zen Mother learned how to distill the most potent aspects of their sound and refined their approach accordingly. That ongoing refinement hasn’t stifled their love for the grandiose—as evidenced by their original score to Alejandro Jodorowsky’s Holy Mountain released in 2019 under the title The Ascent. Across its nearly two-hour run time, Zen Mother offers up blissed out drones (“Lumanche”), nightmarish industrial dirges (“Body Factory”), serene synth arpeggios and 8-bit glitches (“Mars”), and pastoral acoustic guitar sonatas (“Travelling and Learning”). Listening to The Ascent, there appears to be no limit to the collective capabilities and artistic drive of Khot and Wolcott.“I think we are possibly less experimental in our compositional style now,” Khot says of their current work. “The vision still applies, but since we've heard and internalized what we've created since beginning, we may have some sort of restrictive lens of what new music we want to hear happen.” Now rounded out by Sheridan Riley on drums, Zen Mother hone in on their unique fusion of dreamscape melodies, distorted guitar catharsis, throbbing tabletop electronics, and long-arc aural narratives with their Randall Dunn-produced sophomore album Millennial Garbage Preach.Zen Mother’s trio formation skews the project towards more formal songwriting, but also allows the band to indulge in their lofty ambitions and visionary impulses. The curious nature and multi-faceted skills of the members makes Millennial Garbage Preach an almost untraceable effort, but Zen Mother never loses focus, even when it reaches for the esoteric. There’s something in the authoritative synth lines and honey-tongued vocals of tracks “Henry Matisse” and “Sleep” that would undoubtedly appeal to both darkwave fans and aficionados of retro-future composers like Vangelis, yet it feels more organic and volatile than either of those reference points. The vibe gets more vicious on “Order,” where a threatening guitar line and authoritative drums offset the dreamy electronics, like we’re hearing a duel between human will and the steady pulse of the mechanical world. “Pharmacy” introduces skittish drum patterns and a spiritual jazz saxophone into the mix, drawing a thread between sonic voyagers of the past and adventurers of the present. But no other song on Millennial Garbage Preach shows the breadth of ZenMother’s creative aptitude like “The Fugitive.” Here the trio fuses the icy siren songs of Berlin, the ominous lurch of dungeon synth, and flourishes of Old World pagan folk music into a chilling and beguiling apex.“I felt simultaneously connected with the material world and disillusioned by it,” Khot says of time surrounding the latest Zen Mother incarnation. “It's a bit of a cry for help and need to feel whole again… like being outside of your house and not being allowed to get back inside, and it's really cold outside. A persistent gnawing lack of innerness. The uncanny valley of the self.” The duality of warmth and cold, connectedness and disembodiment, light and dark—all of these paradoxes are at the heart of Zen Mother.