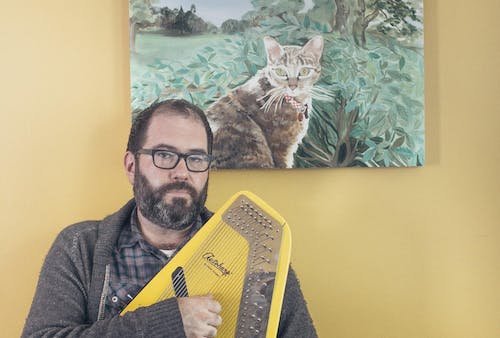 Owen Ashworth’s albums have always been about the human condition, and his latest is no exception. That may sound strange, given that it’s called Animal Companionship, but it’s as human as anything he’s done before.

After hearing problems forced the end of his electronic pop project Casiotone for the Painfully Alone in 2010, Ashworth started making quieter music as Advance Base, releasing A Shut-In’s Prayer in 2012, Nephew In The Wild in 2015 and a slew of tapes and 7” EPs in between. After releasing a 2016 live album, In Bloomington, the prodigious songwriter shifted his focus to his label, Orindal Records, and put his efforts into helping other artists release their music.

This break from songwriting gave him time to explore not just how he makes music, but why he’s driven to do so. “I spent a lot of time thinking about why I write songs and what I get out of writing songs,” he said. “It took a while to get back to writing for myself, unselfconsciously.

“The reason I’ve always made music is because it’s therapeutic for me,” he said. “It’s a way of processing my feelings and understanding my subconscious. I love the ritual of writing a song and performing it over and over again until its meaning reveals itself. It’s the closest I get to meditation.”

“There was a while last year when a bunch of different friends of mine were having problems with their dogs,” said Ashworth, “and even though I don’t have a dog, suddenly I was giving all of this dog advice. I was just thinking and worrying about these friends and their dogs all of the time, and dogs just started showing up in my songs.

“When you explain the relationship you have with a pet, it can sound crazy. We all tend to anthropomorphize the animals we love, talking about them as if they're children, siblings, even spouses,” said Ashworth. “I wrote these songs to help myself understand what pets mean to their owners, how those animal relationships affect our human relationships, and vice versa.”

Unlike the previous Advance Base albums, which were made at home on Ashworth’s trusty 4-track tape machine, Animal Companionship was mostly recorded at Palmetto Studios in Los Angeles with Ashworth’s old friend and former Casiotone for the Painfully Alone collaborator Jason Quever. Animal Companionship still sounds like Ashworth, but Quever’s production adds more depth and clarity than you’ve ever heard from an Advance Base or Casiotone album. The album opener, “True Love Death Dream,” is full of warm synthesizer textures and lush drum machine tones, the kind that sink deep into your soul and take root there. It shows how much time and consideration Ashworth put into Animal Companionship, and how Quever knew exactly how to capture it. From the pedal steel atmospherics of “Dolores & Kimberly” to the densely layered oscillations of “Rabbits,” every movement beautifully frames each song’s narrative. Animal Companionship’s production is expansive but always deliberate, allowing Ashworth to speak volumes through subtle, emotional gestures.

Taken as a whole, Animal Companionship is not just a step forward for Advance Base—it’s the culmination of everything Ashworth has been building for the past two decades. It’s a record that’s gentle in approach and endearing in practice, the kind of thing that only Ashworth could create.

Claire Cronin is an interdisciplinary artist and scholar from Los Angeles who currently lives in the Bay Area.

As a writer, Cronin is the author of A Spirit is a Mood Without a Body, winner of the 2018 Dead Lake Chapbook contest. She has a memoir about her obsession with the horror genre forthcoming from Repeater Books in 2020. Cronin's work can be found in Bennington Review, Sixth Finch, Vinyl Poetry, BOAAT, Cloud Rodeo, Yalobusha Review, Fairy Tale Review, and other places.

As an artist, Cronin has performed in solo and collaborative pieces at The Hammer Museum, Redcat, Los Angeles Contemporary Exhibitions, and Machine Project, and held residencies at Elsewhere Artist Collaborative and Monte Vista Projects.

Cronin has an MFA in Poetry from the University of California, Irvine and a PhD in English from the University of Georgia, where she was also a Lamar Dodd Interdisciplinary Fellow in 2018-2019. Her research areas include twentieth-century and contemporary American poetry, horror, the occult, and death and spectrality in visual media.

Kleinmeister, the new album by Ruth Garbus, is a rarity, the holy wastewater of folk-rock decanted into the Lake of Avalon by a provincial plebe, turned into wine. It is sublime, and absurd, and infused with the green hills, grey cemeteries, and plastic detritus of her Brattleboro, Vermont home.

These compositions come from an odd but familiar world, chiaroscuro silver litter in the beam of a flashlight. In Garbus’s voice, too, the dark and light are combined - even the highest pitches contain pools of undertones, a depth. (She became fully expressed as a mezzo soprano, in both her range and her soul, with the aid of opera singer Jim Anderson, whom she studied with in 2017/18.)

The first track of Kleinmeister is “Strash,” a sensual ode inspired by the book Garbage Land by Elizabeth Royte, with unison singing by Julia Tadlock. This is followed by “Pain,” which builds in size and scope toward a kind of operatic emo-political drama, and achieves levitation with piano played by Travis Laplante (Battle Trance, Subtle Degrees), who also acted as producer, and additional production by Ryan Power, who mixed the album.

From there, Kleinmeister moves into barer bones, highlighting Garbus's resonant voice, rhythmic guitar, and the impeccable recording quality - it was recorded to two-inch tape at Guilford Sound in Guilford, VT by Dave Snyder. Sparse, skewed harmonies, sometimes sung by Tadlock, lilt throughout. The final track, “Fetty Wah,” features Laplante again, this time on tenor saxophone, with improvised melody lines that uplift but still contain a bit of the sorrow of the world.

Garbus’s prior solo recordings - 2010's Rendezvous with Rama LP and the EP’s Ruthie's Requests, Joule EP, and Hello Everybody - have been released on Burger Records, Autumn Records, Feeding Tube Records, and OSR Tapes. Currently, in addition to her solo performances, she improvises vocally with an experimental quintet featuring Wendy Eisenberg, Donny Shaw, Neil Young, and Andy Allen. She was previously in the bands Happy Birthday and Feathers.

"I go back to Ruth’s music over and over again. She has the best, weirdest chord changes, the catchiest and most exotic melodies and lyrics, distilled over what I imagine to be many months and years.

To me her songs reaffirm the power of music itself and its basic elements - big and small intervals placed just so in time, the play of sound and meaning in words, parts put together without force or artifice. Ruth is one of my favorite singer-songwriters ever." - Chris Cohen