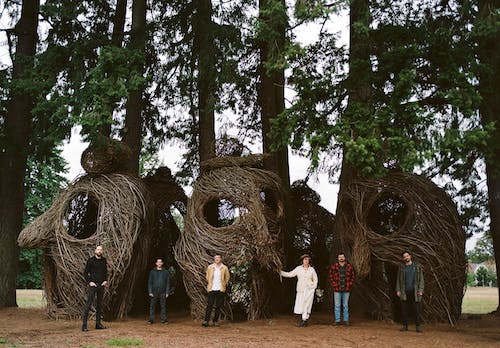 Abronia is a six-piece band consisting of two guitars, pedal steel, tenor saxophone, bass, and a 32” marching band drum with floor tom legs on it.

Their debut album was released on vinyl through Portland's Mississippi Records associated, Water Wing Records, and on CD by the British label, Reverb Worship, in the summer of 2017, earning praise from critics around the world and getting consistent airplay on stations such as the legendary WFMU.

Their second album is due out on vinyl on October 25th, 2019 as a co-release between the British based label, Cardinal Fuzz and Massachusetts based, Feeding Tube.

In these times of multidimensional warfare, Void Realm brings listeners back from psychic death with cathartic spells of heavy resonance. An amalgam of dark, shattering instrumentation woven with searing, hypnotic vocals, Void Realm unveils heretic hymns from a primordial abyss to revive the ravaged soul of humanity and manifest a liberated reality.